Performance add-ons for the Porsche Macan Turbo make this SUV a Turbo S in all but the name... 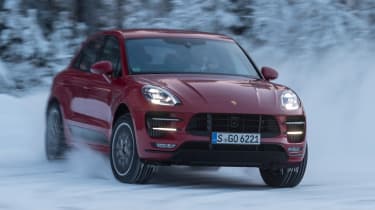 The extra standard kit and performance improvements appear decent value on paper, but more hospitable climates will be needed before we’d recommend stumping up the extra cash for Porsche’s new Performance Package. What the conditions did reinforce, though, is the Macan’s sports car like demeanor. Effectively a Turbo S in all but its name, a badge on the bootlid would surely have added further appeal for those it’s aimed at.

Porsche may be renowned for its sports cars, but its SUV duo – the Macan and Cayenne – are the big players when it comes to sales. The pair have racked up almost one million sales between them, and this new flagship Macan Turbo with Performance Package is the latest addition to the lineup.

There is a small problem, though: its name. Aside from being a bit of a mouthful, the majority of people who buy the fastest and most expensive Porsches, want people to know about it. But the Performance Package doesn’t do this – appearing visually identical to the Turbo it’s based on. A Turbo S badge on the boot would undoubtedly tempt more people to take the plunge. 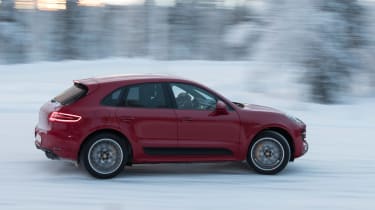 Nevertheless, the Performance Package adds a further £5,533 to the price tag and sees power from the 3.6-litre bi-turbo V6 increase by 40bhp. That means peak power is now 436bhp, while torque has increased by 50Nm to 600Nm. The extra grunt is produced through an ECU tweak rather than any fancy mechanical changes, so the effective seven-speed dual-clutch gearbox and four-wheel drive system remain untouched.

Along with the extra performance, Porsche also throws in a standard-fit sports exhaust, Sports Chrono pack featuring launch control and beefier front brakes, while the Performance Package also drops the Macan 15mm lower to the ground.

On the spec sheet those changes have had a marked improvement. Porsche claims 0-62mph is now achievable in 4.4 seconds – four tenths faster than the Turbo – with the top speed increased to 169mph. Despite that, fuel economy remains a reasonable 30.1mpg.

Usually, such advancements would be immediately noticeable. However, our first opportunity to get behind the wheel was on in sub-zero Finland just before Christmas. Icy roads and a snow covered arctic test track do a highly effective job of masking a car’s dynamic make-up. 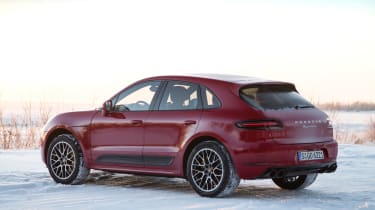 Here, the power hike was pretty much undetectable. Try to find it and any application of throttle has one of two consequences: mighty rooster tails of snow in the rear view mirror, or stilted progress caused by an overworked traction control system trying to keep everything locked down.

On the road, such conditions mean every input with the throttle and steering has to be delicate and smooth. Even if the car begins to slide, the Macan’s four-wheel drive system combines with Porsche’s traction and stability controls to rein everything in and prevent you from having to make an awkward phone call to your insurance company. It helps that the Macan is an inherently well-balanced and agile SUV to begin with, however.

Switch all of the safety systems off and the Macan continues to show its wilder side. The beauty of the four-wheel drive system is that when cornering only the minimum amount of power required to keep you pointing in the right direction is sent to the front axle. It’s what helps the Macan retain its sports car-like handling.

Jab the throttle on the entry to a corner and you’ll feel the rear end gracefully swing round. Slides can be held with huge confidence – such is the crispness of the steering and sharpness of the throttle response. Admittedly, in terms of real world driving, this is largely irrelevant, but it strengthens the Macan’s credentials as being the best handling SUV currently on sale.