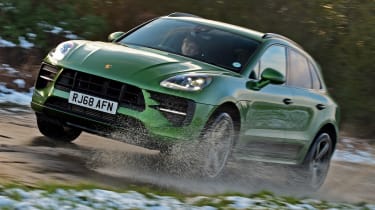 Prices for the Macan range start from around £47,000, so all cars face the higher road tax rate of £450 for the first five years of ownership after the initial CO2-weighted payment that’s rolled into the on-the-road price. When you consider the price of some of the Macan’s options, most buyers won't think twice about this premium.

And that's the thing with the Macan: just like any other Porsche in the range, there is an extensive list of options you can add to personalise to your exact taste.

Clearly, the most fuel-efficient model in the line-up was the Macan S Diesel. But, as that car is no more, the updated 2.0-litre turbocharged four-cylinder Macan is now the economy champ.

However, it can't get near the diesel's claimed 46.3mpg average, with an official figure of 27.7mpg quoted, plus an emissions figure of 232g/km.

The Macan S won’t be the cheapest car to run, but you may consider this a worthy sacrifice for the performance on tap. Porsche quotes fuel economy of 23.9 to 26.4mpg and CO2 emissions from 243g/km.

The more powerful Macan Turbo isn’t too far off the S in this respect: fuel economy is quoted at 23.5 to 24.8mpg, with emissions from 259g/km. The new GTS sits between the S and the Turbo, delivering a maximum 25.0mpg and producing a CO2 figure of 255g/km. 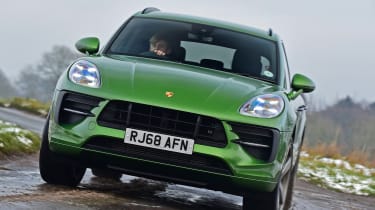 Each model is performance-oriented and with prices escalating well over the £46,000 starting point, you're destined to be paying a small fortune out on insurance as well as fuel. Still, you have to compare like-for-like, and when you look at cars with similar performance and ability to the Macan, it doesn't seem quite so bad.

Porsche itself is known for incredibly strong residual values and this applies to the Macan too – it’ll hold up to 10 percentage points more than an equivalent Jaguar F-Pace, with our experts rating it at a residual value of around 60% after three years and 36,000 miles.