The Superb is a refined and comfortable cruiser, but don't expect sporty dynamics 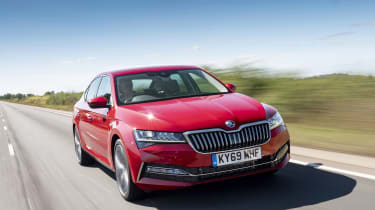 The Superb’s mission is to be an executive limousine for the masses, so the focus is firmly on comfort and refinement ahead of pin-sharp driving dynamics. And whether you’re wafting around town or cruising quietly along the motorway, it’s clear that Skoda has done a great job.

Refinement is noticeably better than its predecessor, especially with the quieter petrol engines under the bonnet, making it a relaxing way to cover big miles. Four-wheel-drive versions grip harder when the weather turns nasty, but front-wheel-drive models feel just as planted the rest of the time.

Adaptive dampers are an option on SE cars and above, or standard on Laurin & Klement cars. They offer a dramatic effect on the Superb’s behaviour as you toggle through the three settings – Comfort, Normal and Sport.

In Comfort it floats over crests and dips, while the nose has a tendency to bob, and body control is too slack for fast cornering. Sport tightens everything up, but feels a bit too brittle on poor surfaces and with the larger wheels fitted to top-spec cars. Normal mode, then, is the best compromise for everyday driving. 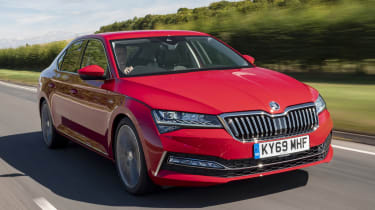 If you want to save money then the manual gearbox is perfectly adequate, but we’d recommend stretching to the DSG auto that adds another layer of sophistication to the driving experience and suits the Superb’s laid-back character.

Go for a SportLine Plus model, and while the 19-inch alloys and subtly dropped ride height give the Skoda plenty of appeal, they do affect the ride quality slightly. It lacks the same absorbent edge as the standard Superb on the road, but the ride could never be considered uncomfortable. The optional Dynamic Chassis Control adaptive dampers (around £800) help negate this a little when in Comfort mode.

The trade-off is that the Skoda is more direct on twisting country routes. The steering is sharper and less spongy than in some rivals, while there’s marginally more grip, too, because the Superb controls roll better.

The Superb’s engine range was revised in 2019, with petrol and diesel models still on offer to suit most buyers.

The four-cylinder, 1.5-litre TSI petrol produces 148bhp and is available on SE models and above, mated to a six-speed manual or seven-speed DSG automatic gearbox. A 2.0-litre four-cylinder engine is also offered, producing 187bhp and available in SE L trim exclusively with a DSG gearbox.

Most buyers will opt for diesels, however – and there are plenty to choose from. Superb S models are only available with diesel power, starting with a 1.6-litre four-cylinder with 118bhp that’s only available with the DSG gearbox. Those who want a manual will need to go for the 2.0-litre TDI with 148bhp, which itself is also offered with the DSG on SE models and above, as well as with the option of four-wheel drive in SE L trim onwards.

The most powerful engine available is a 2.0-litre TSI petrol with 268bhp – enough for a 5.6-second sprint to 62mph in the hatch or 5.7 seconds in the estate. It’s an engine best enjoyed with the optional adaptive dampers, but even in conventionally sprung cars is fast and agile enough to keep up with some much sportier machinery.

The best-performing diesel is the 187bhp 2.0-litre with optional four-wheel drive; 0-62mph takes eight seconds in the hatchback. The front-drive 148bhp 2.0-litre diesel manages a 9.1-second sprint to 62mph with or without the DSG gearbox fitted, while the auto-only 1.6 TDI has a quoted time of 11.1 seconds.