With no engine to find space for, and the batteries and the electric motor mounted low in the car, the Tesla is really practical. Its sleek hatchback body provides generous accommodation for five. Its crushing performance, compliant ride and silent-running refinement make it a genuinely satisfying and relaxing mode of transport.

But in spite of the fact the Tesla goes far beyond what any other production EV is capable of, the biggest limitations are its range and the lack of charging infrastructure. The maker is working to combat this, with the proliferation of Supercharger fast-charging centres, but they're still not as common as local petrol filling stations. That said, all new Model S variants get around 1,000 miles of Supercharger charging for free every year, with owners charged only a small fee to use the setup after this.

The Tesla Model S is 4,970mm long, which makes it a less than almost 8cm shorter than a Porsche Panamera and 27cm shorter than an Mercedes S-Class. The Tesla and Porsche both make the S-Class look slim though – mirror to mirror the Tesla is 1,964mm, the Porsche 1,937mm, while the Mercedes is 1,899mm. The Tesla’s 1,445mm roof height splits the other two.

In the back, there’s plenty of legroom, you get three ISOFIX mountings and there’s also no transmission tunnel to be climbed over. All cars get a full length panoramic roof, but headroom is fine for all but the very tallest adults. 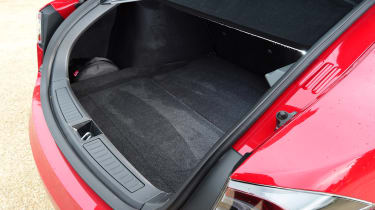 The boot is pretty cavernous, but there’s a lip to lift luggage over. All told, there’s 894 litres of luggage space – 150 litres of which are in the front where the engine would usually be. Drop the rear seats and space grows to 1,795 litres. It's more practical than a Porsche Panamera, which gets a 495-litre boot that expands to 1,263 litres with the rear seats folded down.