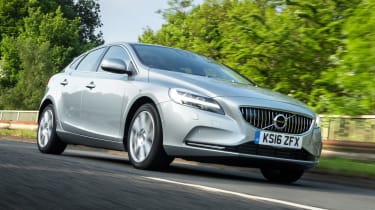 Volvo's revised diesel engines deliver good fuel economy. The D2 manual has the best economy, and has company car tax-friendly emissions, too. The D3 and D4 are both rated at 74.3mpg, while emissions of 99g/km mean even the most powerful cars are attractive for business users. Add a six-speed auto to any engine and fuel consumption is a little poorer.

The petrol engines are also reasonably efficient, given their torquey turbocharged punch, while again the automatic models are slightly worse for fuel economy and produce higher emissions.

As for running costs, long service intervals and Volvo’s generally strong reliability should mean the V40 costs less to own than some of Volvo’s larger models. Driver Power owners’ experience is certainly encouraging: they vote the V40 the 15th best car for overall running costs, so there should be no nasty surprises for your wallet.

Perhaps reflecting its semi-premium status, insurance groups for the V40 are a little higher than the mainstream norm. A base T2 Momentum comes in at group 18, whereas a similar-power Ford Focus 1.0 Ecoboost starts at group 12. There's a bit of a step up in ratings from T2 to T3, which starts in Group 24 in R-Design trim.

It's a similar story for the diesels, as the D2 starts in group 19, moves to group 20 in R-Design trim, then the R-Design D3 starts in group 25. The Cross Country models are in similar insurance group, but it should be easier to repair their scuff-resistant panels.

Retained values for the Volvo V40 are reasonable, if not outstanding. There's a spread of around 38-46 per cent in retained values after three years, with the petrol cars being the best performers of the range. Interestingly, even though the used market craves an SUV, it's clear that buyers can look beyond the Cross Country's styling and see it's just a stylised hatchback. As a result, residuals are poorer for these models.

Compared to rivals, the V40 isn't a great performer. The equally ageing Audi A3 Sportback has better retained values in the mid-40 per cent region, while even the latest Ford Focus is a better-performing model.