The V90 feels everything a premium estate should be - a refined cruiser, with a comfortable, plush cabin and a hefty load space. It feels odd to say this about a big Volvo wagon, but those who are after ultimate boot size will look elsewhere. For everyone else after an upmarket load-lugger, the V90 totally merits a place on your shortlist. We’ve held off on a five-star rating here, but in the right spec and on the right wheels, we can see the V90 getting the maximum score when we get it on UK roads.

The new Volvo V90 is designed to win back the glory days of Volvo - back when the crown of 'big premium estate car' belonged to the V70 and its predecessors. The V70 lost that accolade because, by 2016, it really was badly in need of an overhaul, especially with accomplished and ever-improving rivals like the BMW 5 Series Touring and Mercedes E-Class Estate. So the V90 is an important car - debuting not just a new badge but fresh chassis technology, a range of new turbocharged four-cylinder engines, and an upgraded cabin with styling and tech inspired by the XC90.

We tried the V90’s sister car, the S90 saloon, in snowy conditions and pre-production form earlier this year. But this is our first opportunity to try the V90 in final form and on tarmac.

The V90 will be available with a choice of two 2.0-litre, four-cylinder diesel motors when sales start later this year. The more modest of the pair is badged D4; it produces 187bhp and 400Nm, enough to take the V90 from 0-62mph in 8.5 seconds. The D4 is the more efficient of the V90’s engines, with CO2 emissions of 119g/km. This figure is achieved with an eight-speed automatic gearbox, too; there’s no manual option, for now at least. 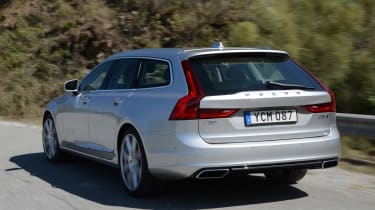 The second conventional engine is badged D5. It’s another four-cylinder unit and, like the D4, it uses twin turbochargers to pack a stronger punch. It also features an electric compressor called PowerPulse that’s designed to reduce turbo lag. The D5 unit produces 232bhp and 480Nm so the 0-62mph time falls to 7.2 seconds - but it is available only with four-wheel drive, so CO2 emissions are higher, at 129g/km, and the BIK rate jumps from 23 percent to 25 percent.

As with the XC90, Volvo is placing great emphasis on hybrid technology - so while it has yet to confirm prices for a T8 Twin Engine plug-in hybrid version, the petrol-electric edition is already waiting in the wings. It’ll have around 404bhp, crack 0-62mph in just 5.2 seconds and return CO2 emissions of 47g/km.

What’s clear from the raw figures, though, is that Volvo is no longer chasing the title of ‘biggest estate on the market’. Indeed, the V90’s capacity with its seats folded down - 1,526 litres - falls some way short of the load space on offer in the 5 Series Touring and Audi’s A6 Avant, let alone the likes of the cavernous E-Class. It’s actually smaller than the old V70’s capacity, at 560 litres with the rear seats up. 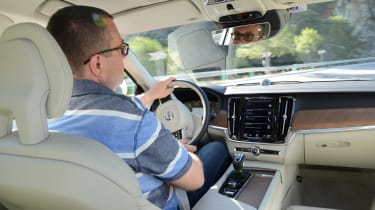 Step up to Inscription trim - which is broadly in line with M Sport and Luxury editions of the 5 Series - and you get softer Nappa leather on the seats, 18-inch diamond-cut alloys, chrome detailing, hands-free tailgate operation and a larger driver information display.

On the road, the V90 feels as stable, secure and comfortable as the S90 - and that’s a pretty good thing. Volvo insists that it isn’t chasing BMW and Jaguar for handling agility and while its assessment is accurate, the V90 doesn’t feel especially wallowy through corners. The steering is pretty light but consistently so, and it’s easy to place the V90 with accuracy and confidence. 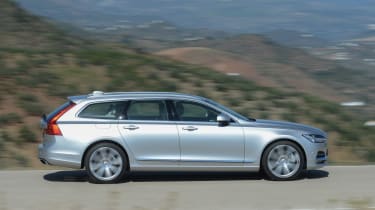 If we have a slight concern, it’s that the ride may still prove a little busy on the fussy surfaces of UK roads. If you’re going to hedge your bets and get an order in now, we’d advise you to steer clear of the optional 20in alloys; 18s or 17s should do fine.

The D5 diesel engine, meanwhile, has more than enough punch to pull the V90 along with real verve. It does most of its work by 3000rpm, and is perfectly happy to pull rapid British motorway speeds at around 1200rpm. The eight-speed auto is quick to shift, though it doesn’t feel perhaps quite as clever as BMW's eight-speeder.

The refinement is pretty impressive, too; rev the engine hard and there’s a slight diesel twang but in all but extreme situations it retains a smooth note. It quietens down to a subdued hum at a fast cruise, too; at that point you’re more likely to hear wind noise from around the large side mirrors, though even they’re not too intrusive. 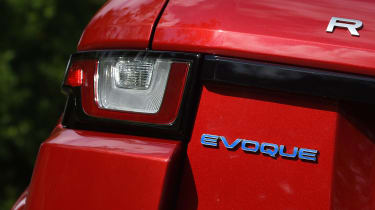 The cabin is an even stronger proposition. We love the ‘Volvo environment’ in the XC90 and while the V90 doesn’t have that car’s commanding elevated seating position, the rest of the package does feel like it’s been turned up another notch. Natural materials are chosen tastefully, the central screen is clear and easy to use, and the (optional) full-length sunroof gives the interior a bright, airy feel.

The load floor is decently flat and square, and lowering the seats isn’t too difficult a chore. They fold down to a usefully small footprint, too, allowing the floor to stay commendably flat above them. As big as an E-Class Estate? No. But it will seem a hefty boot to most of us mere mortals.