The Volvo XC60 T8 Twin Engine is the 2018 Auto Express Premium Hybrid Car of the Year, with the BMW 530e and Range Rover Plug-in commended 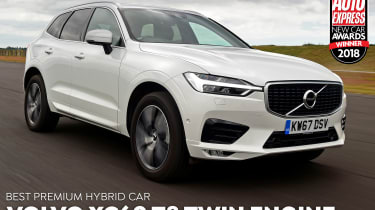 It’s been a good year for Volvo at our New Car Awards 2018, with the XC60 T8 Twin Engine scooping one of two victories for the Swedish brand. It’s a well-deserved gong, too; the already capable XC60 is arguably at its brilliant best when combining petrol and electric drive.

Battery power lets the XC60 cover up to 28 miles on a single charge which, should you top it up daily (between two and a half and six hours, depending on your power supply), means that much of an average commute can be done using little or no petrol. It’s the reason the T8’s official economy claims stand at 122.8mpg. Take this with a pinch of salt, but still expect strong real-world efficiency.

The XC60 isn’t a plug-in hybrid that sacrifices power, though; it’s deceptively quick. The 2.0-litre turbo and supercharged engine is combined with an electric motor to deliver a total of 401bhp, which gives this SUV a 0-62mph time of 5.3 seconds.

Yet it’s the T8’s comfort that impresses the most. The electric motor delivers near-silent performance and swift acceleration around town. When the petrol unit chimes in it’s smooth, too, while the eight-speed auto gearbox manages both power sources well.

Combined with the Pilot Assist system, which maintains the Volvo’s speed and keeps you in your lane when on the motorway, it makes for an incredibly capable mile-muncher.

The interior is a lovely place to spend those journeys. The slick, minimalist design stands out against its rivals, and it’s light and airy, with easily enough space for five adults. Given the benefits of Volvo’s hybrid tech, it doesn’t compromise practicality much, either; boot capacity is only slightly down on its conventionally fuelled cousins’.

You can choose the T8 Twin Engine in sporty R-Design or high-spec Inscription trims; each is available with a higher ‘Pro’ level. R-Design is marginally cheaper and gets all the kit you’d need, so it’s the one we’d go for. Part-leather seats, a nine-inch touchscreen, sat-nav, LED lights and a panoramic roof all feature as standard. 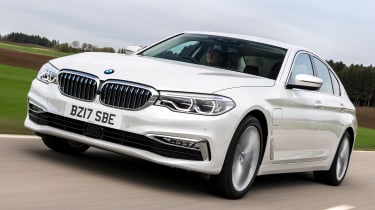 The latest 5 Series is a brilliant all-rounder, and in plug-in 530e form offers huge appeal to company car drivers. The mix of 2.0-litre turbo petrol and an electric motor is almost a match for the diesel-powered 530d model for performance and price, but if you cover short distances regularly then the PHEV saloon should be cheaper to run, too. 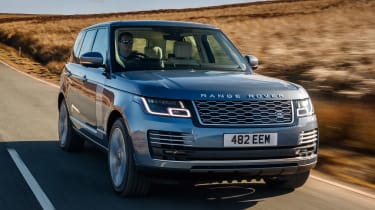 A beautiful cabin, timeless style and wonderful refinement make the Range Rover one of the best SUVs you can buy; with hybrid tech the PHEV is among the most efficient, too. EV mode suits the car’s refined character and it combines a potent 398bhp with CO2 emissions of just 72g/km.