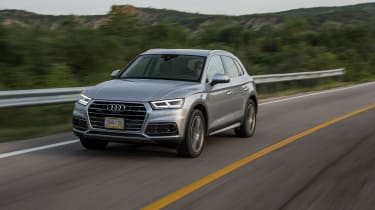 Classy Audi Q5 scores a direct hit to the premium small SUV market. It has the smoothest diesel in its class, is good to drive, offers plenty of space, should be cheap to run and feels beautifully finished. What it might miss out on in the desirability stakes beside SUVs like the Jaguar F-Pace, it more than makes up with its all-round competence.

With the arrival of the five-star Jaguar F-Pace and the updated Land Rover Discovery Sport stealing all the limelight we'd understand if the well-established Audi Q5 had slipped under your radar of recent - but it shouldn't have because it's all-new for 2017.

Out to regain its footing in the premium SUV class and pinch back sales from its new rivals, so far, we've only tried the most powerful versions. We've come away impressed by both the turbo petrol and V6 diesel's blend of performance, refinement and comfort but now it's time to try the crucial model for British buyers - the more affordable 2.0-litre turbodiesel. 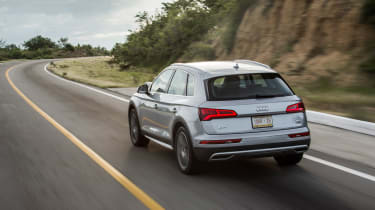 Just to recap, in case you're not too familiar with the second-gen Q5, the new Audi SUV is based on the car-maker's 'MLB evo' platform that's shared both with the impressive A4 and bigger more luxurious Q7. Fractionally longer, wider and taller than the current car a mixture of lightweight materials has cut the kerbweight of the 2.0 TDI diesel by 90kg - the weight of a large passenger.

With less weight to carry around, this bodes well for running costs. Maximising this advantage is an updated 2.0-litre diesel that's combined with Audi's efficient seven-speed dual-clutch DSG auto and the firm's quattro Ultra all-wheel drive.

Two-wheel drive will not be offered but thanks to the Q5's new all-wheel drive hardware it is able to decouple a pair of driven wheels to cut drag and friction. The result is the new Q5 is up to 16 per cent more fuel efficient and 15 per cent less polluting than the old model.

With emissions of around 133g/km and average fuel consumption of 56.5mpg (on smaller 18-inch wheels) both business users and private owners will reap the rewards, especially when you factor in strong resale values. In short, the new Q5 boasts nothing less than some of the lowest running costs in its premium SUV class.

An impressive start then for the entry-level turbodiesel but one that gets better behind the wheel.Neither the Mercedes GLC nor Jaguar F-Pace, or any other of its main rivals for that matter, are as quick, quiet or as smooth as the 187bhp 2.0-litre diesel.

For the record, the Audi takes 7.9 seconds to cover the 0-62mph benchmark - a sprightly 0.8 second quicker than the more overtly sporty 2.0d Jag F-Pace - although there's a catch. The Audi can't quite match the extra engagement the F-Pace promises. The Q5's precise steering feels overly light too but many would happily trade a little excitement behind the wheel for the added comfort the Q5 delivers. 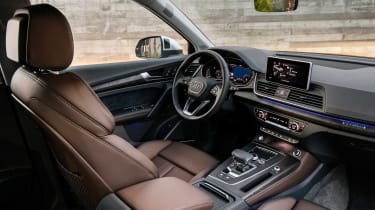 Especially when the Q5 comes equipped with Audi's new optional adaptive air suspension. OK, it's not cheap costing an alarming £2,000 extra, but make sure you try before you buy because it does a good job of filtering even the worst battle-scarred road's imperfections.

The same suspension can also raise the Q5 body 45mm away from harm off-road and lower again by up to 55mm for ease of loading heavy objects. The Audi's fine practicality extends to space both in the front and rear seats where there's plenty of head and shoulder room.

Kids perched in the middle seat might moan the central transmission tunnel robs some foot space but throw in a fractionally bigger boot and you'll appreciate the extra room over the last model. 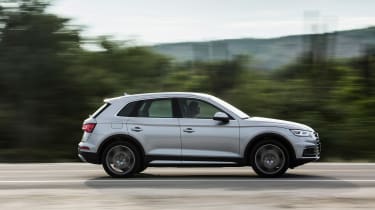 In fact, it's inside the cabin the Audi quite comprehensively trounces its rivals. For fit and finish the Q5 eclipses any small SUV you care to mention and with the Audi Virtual Cockpit in place (a £250 option) it beats them for design too.

Equipment is decent on all models, but there are some obvious omissions which will require a costly visit to the options list to fix. We think it's very disappointing that the SE, Sport and even S line trims all miss out on the added protection of rear side airbags (£350).

It's also unfortunate Audi demands £750 more, even on the most expensive 2.0 TDI, for adaptive cruise control - something that's standard on the equivalent non-premium Volkswagen Tiguan despite being priced thousands of pounds cheaper.

Shame, because all this detracts from the Q5's achievements. It remains an excellent all-rounder and one that deserves not to be overlooked even in the face of flashier new competition.