Added punch of Toyota oil-burner could be a crucial factor in this test. 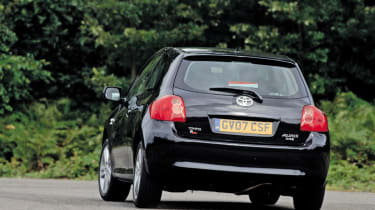 Bosses at Toyota will be hoping that discretion is the better part of valour, because the Auris is one of those cars you don’t look at twice. While the T180 appears solid and chunky enough, its styling simply isn’t exciting. It’s not helped by the fact that the 17-inch alloys don’t quite fill the wheelarches.

In common with the Mégane, the Auris’s diesel is not as entertaining to use as a petrol engine. But this is really the only criticism that can be aimed at the Toyota unit, because otherwise, it’s excellent. It’s more refined than the Renault powerplant, and is very quiet when cruising on the motorway.

While both of the four-cylinder turbocharged oil-burners in this test produce 175bhp, the Auris’s has more pulling power. It develops 400Nm of torque, compared with the 360Nm output in the Renault. That means the Toyota is punchy out of tight corners, and delivers plenty of grunt on the open road.

At the test track, our figures show the Renault was just under half-a-second faster from 0-60mph, at 9.8 seconds. But both cars recorded identical times of 9.4 seconds for the 30-70mph sprint through the gears – and that’s a much more realistic measure of real-world performance.

The Toyota’s six-speed manual transmission does a good enough job at normal speeds but, if you rush the changes, it’s not as slick as the Renault unit. The Japanese car’s clutch isn’t as impressive, either. It’s rather strongly sprung, and can judder in heavy urban traffic.

On the motorway, the Auris is composed, stable and a touch more refined than the Mégane. Sadly, though, straight roads suit it better than twisty ones. Whereas the Renault’s steering feels taut and involving right from the start, the Toyota’s is limp and vague. It weights up at speed, but even then there isn’t anywhere near enough feedback.

Fast cornering simply isn’t enjoyable – there’s too much body roll, and the Auris doesn’t hold its line through a bend as tightly as the Mégane. But the T180 is more comfortable, and has a far better ride than the Renault around town.

Inside, Toyota has tried to pull off a bit of a trick with the Auris’s cabin. When you sit in the driver’s seat, the first impression you get is of a sporting, high-quality machine. The steering wheel is smaller and smarter than the Renault’s, the well lit instrument panel looks expensive and the gearlever is within comfortable reach thanks to the raised central transmission tunnel.

But these early impressions soon fade when you examine the rest of the interior. Its plastics are no better than those in the Mégane, and the trim on the centre console could be more solid. The driving position is not as good as the Renault’s, either, and the seats don’t offer enough side or upper back support.

With its double glovebox, the Auris is easily ahead of its opponent in terms of stowage space, and rear passengers benefit from more legroom. The trouble is, the back seats can’t be folded flat – they can in the Renault. Overall, the Toyota feels more like a car that’s about to be replaced rather than one which has only recently arrived on the market.

The Auris is cheaper to buy, and also to run as a company car. It’s marginally more economical as well. But can this compensate for its flaws?

An extensive track test session meant the Auris returned 36.8mpg with us – owners should do better. It’s ahead of the Mégane, but a smaller tank limits the Toyota’s range.

The Auris is estimated to retain 43.9 per cent of its value in three years. So it will lose £2,137 less than the Renaultsport over the same 36,000-mile period.

Toyota’s diesel emits 164g/km of CO2. That puts the car in the 22 per cent bracket, so lower-rate tax payers are only £117 per year better off than Renault owners.