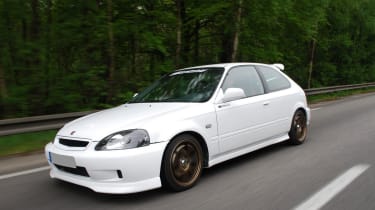 This is the hot Civic genesis – the first family hatchback from Honda to wear the special Type R badge. It also set the philosophy from the start, with plenty of weight-saving features over the standard car. These included a hand-tuned 1.6-litre four-cylinder engine with – of course – the company’s soon-to-become famous VTEC system; a limited-slip differential; a close-ratio gearbox to make the most of the 182bhp output; and extra welding on the chassis to stiffen up the bodyshell.

On top of this, and in order to save even more weight, there was no air-conditioning or electric windows, and not even a radio. The focus was on going fast and having fun, with the same great sensory experience from behind the wheel.

The Type R EK9 came only as a three-door, and was never officially sold in the UK – although thanks to exposure on various racing games, the EK9 was a desirable and rare hot hatch so plenty of grey imports found their way over here. This generation of hot Civic was and remains so pure, with a perfect balance of power, grip and feel, that meant it was a hit straight out of the box. 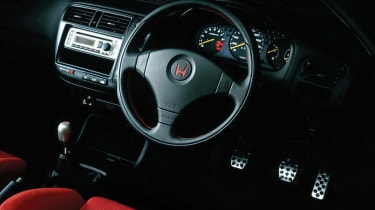 The coronavirus lockdown is forcing people to drive their cars less, which could be a problem for owners of modern diesels
Visit/news/109089/kia-telluride-named-world-car-year-2020

The Kia Telluride has been named World Car of the Year 2020, beating the shortlisted Mazda 3 and Mazda CX-30
Skip to HeaderSkip to Content