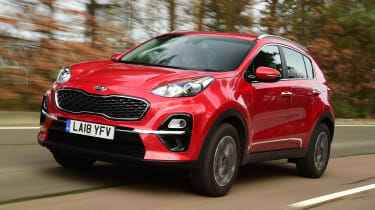 Like all small SUVs in the class, the Sportage comes with five doors only and, like most of its rivals, a raised ride height and tall body gives a great view of the road ahead. The driving position feels good, but the narrow side windows and thick rear pillars mean visibility out of the rear isn’t the best. Happily, a reversing camera is standard throughout the range.

The Sportage doesn’t offer a huge number of cubbies. There’s a large glove box, two cup holders and big door bins but these spaces will soon fill up and there are no clever places to hide extra items.

You can fit three people comfortably in the rear of the Sportage – even though the middle seat passenger has to position their feet either side of the transmission tunnel. There’s excellent kneeroom and decent headroom despite the sloping roof-line. There are isofix points in the two outer seats for child seats and one particular feature that marks out the Sportage are its reclining rear seats offering an extra bit of comfort in the back. 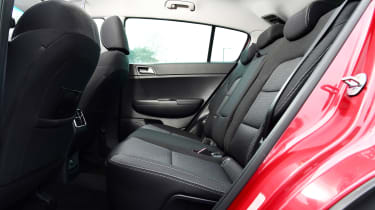 Boot space in the Sportage is about average for the class. The shape is nice and square and the load lip is low and flat, so it’s easy to load big items in and out. At 491 litres, the Sportage boot is comfortably larger than that of the Ford Kuga and Nissan Qashqai. However, if you’re after much more space, the Sportage falls short of the Peugeot 3008’s 520-litre boot.

Go for the mild hybrid models, and there’s no underfloor storage because a battery takes up the space. It’s a mild inconvenience, and one which means that, unlike the rest of the range, there isn’t enough space for a parcel shelf under the boot floor.

As you’d expect, the towing capacity of the Kia Sportage varies depending on the model. The entry-level petrol and diesel engines with the manual gearbox can tow a braked trailer of up to 1,400kg in weight in front wheel drive guise. As you move up to the more powerful engines in the range and the 4x4 models, the towing weights increase with the most capable all-wheel drive Sportages able to offer a 2,200kg towing capacity. Be aware, however, that choosing the automatic gearbox options will limit towing capacity. The 1.6-litre turbo petrol only offers a 1,600kg maximum, even in 4x4 guise.