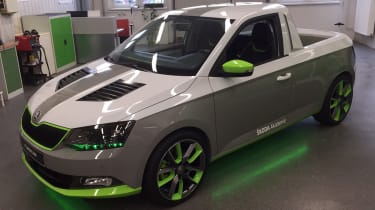 Skoda has taken the wraps off a wacky one-off pick-up version of its all-new Fabia.

The model, named Funstar, will be showcased at the Worthersee tuning festival in Austria in mid-May, and will be seen by many as a spiritual successor to the Felicia Fun, a pick-up which enjoyed cult status among Skoda fans in the late nineties.

The Fabia Funstar was designed and created by a team of 17 and 18-year-old students at the Skoda Akademie vocational school, following their success in designing the Citijet Citigo-based drop-top for last year’s Worthersee event. 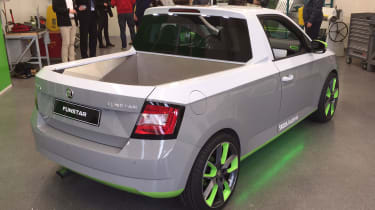 It uses the recently launched supermini as a base, but true to the spirit of Worthersee, features a number of alterations and add-ons to create something unique.

The frameless body dispenses with the Fabia’s rear seats and instead follows the example of the Felicia Fun, with a load bed – made of stainless sheet metal - to maximise carrying capacity.

The sides were reinforced and panels adjusted to fit in with the new design, while the B-pillar has been widened and there are large vents on the bonnet.

Under the skin, the model uses Skoda’s familiar 1.2 TSI engine with 121bhp and seven-speed DSG gearbox, while there’s a new exhaust system and a fruitier engine note. A 177bhp 1.8-litre engine had to be ruled out, as it was too large. 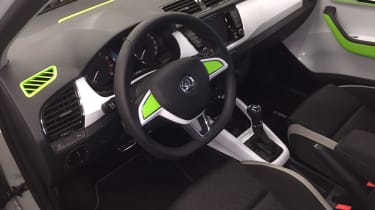 The shock absorbers have also been tweaked on account of the car’s lighter weight at the rear.

And we’re told the Funstar is a working concept, with Auto Express likely to be able to get behind the wheel in June.

The students initially considered a black colour scheme for the Funstar, but eventually opted for a steel grey, moon white and reflex green combination, although the green used is not the familiar Skoda corporate colour. Green 18-inch Gemini alloy wheels from the Octavia vRS add further glamour and were chosen, apparently, because 19s would not fit in the wheelarches.

LED headlights with green daytime running lights add a touch of menace at the front, while the tail lamps feature a total of 320 diodes in the traditional Skoda C-shape. 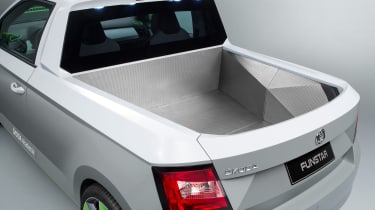 A green surround for the grille and green wing mirror casings help the car stand out further, while there’s further green detailing inside, plus sports seats and a racy flat-bottom steering wheel.

The sound system, meanwhile, has been boosted from 300 to 1,400 watts, while the infotainment system has full smartphone compatibility.

The Funstar name was apparently chosen via a Facebook competition, with a primary school local to Skoda’s Mlada Boleslav base in the Czech Republic coming out on top, although the link to the Felicia Fun is obvious.

Sadly, there is no chance of the Fabia Funstar making production, although the students at the Skoda Akademie are hopeful that it will be similarly well received to the Citijet, to allow them to create another model for next year’s Worthersee event. 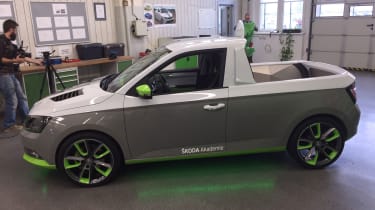 The Funstar’s spiritual predecessor, the Felicia Fun, was launched in 1998, and quickly became one of the most recognisable cars on the road - despite only 300 being made in right-hand drive - on account of its vivid yellow paintjob.

It was marketed as a lifestyle pick-up which could combine work duties with leisure activities, and featured an unusual seating arrangement where the rear ‘wall’ of the cabin could be pulled out to free up two additional seats for passengers in the load bed. 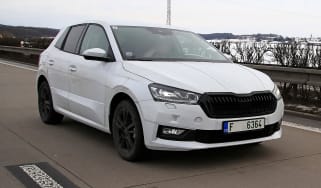