The RAV4 drives and rides well, but its CVT gearbox isn't fantastic 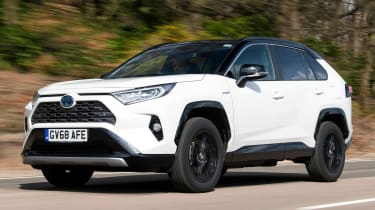 On the road, the RAV4 is a curious mix. This generation’s body is 57 per cent more rigid than the outgoing model’s, and this - coupled with the TNGA underpinnings - makes it a surprisingly capable performer on twisty roads. It shirks the worst body roll excesses that you find with SUVs, and the front end turns in crisply, with steering that’s direct and nicely weighted. Barring the worst hooliganism, it doesn’t suffer much from understeer, and it is admirably amenable to sudden changes of direction.

These traits promise to reward the driver more than you might expect in such a tall vehicle, but Toyota’s hybrid powertrain isn’t quite willing to play its part in that. It’s not that it’s unrefined or inherently unsorted; it’s more that the Hybrid Drive principle of having an engine speed not entirely related to how fast you’re travelling, is just an insurmountable obstacle to driver involvement.

You can use steering wheel-mounted paddles to play with the ‘stepped’ ratios in the system, particularly under braking, but it’s always going to ignore you and do what it thinks is best once you’re back on the throttle.

Recognise this fact and adopt a smooth, relaxed approach and you’ll find the 2.5-litre set-up fast enough for most situations, including around town. And there’s no doubt that the larger capacity and increased torque mean that when the CVT revs do go skywards – and yes, they still do, from time to time – they tend to be shorter blasts than you might experience in, say, an older Toyota Auris or Prius.

The front-wheel-drive model takes 8.4 seconds to reach 62mph while the AWD edition, which has an extra motor on the back axle, trims three-tenths of a second off that figure.

When you’re cruising on the flat at motorway speeds, you’re unlikely to hear much engine noise at all – although this is as much down to a fair bit of wind rush from the side mirrors as it is the refinement of the latest powertrain.

Most of our meaningful mileage was in a front-drive Dynamic but we also tried a four-wheel-drive edition on some pretty badly rutted and muddy terrain. It acquitted itself well enough to persuade us that this RAV4 has more than enough ability off road for the type of person who’s going to buy one. There’s no discernible pay-off in on-road performance either.