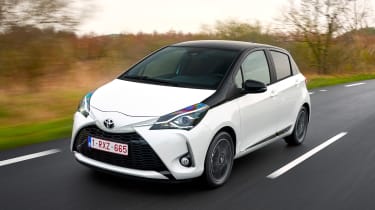 With the notable exception of the very costly but now off forecourts GRMN hot hatch, running a Toyota Yaris isn’t going to be too financially taxing whatever spec you choose, with low emissions across the board. Coupled with good-value pricing and decent residual predictions, it’s definitely a purchase to please your accountant.

The great thing about the Yaris is that all mainstream engines in the range are very economical. We'd opt for the Hybrid, if efficient (and clean) motoring is your goal; it combines a 1.5-litre petrol engine with an electric motor to great effect, claiming 60.1mpg fuel economy and CO2 emissions of just 83g/km.

Plus, in Excel spec, the Hybrid is the most expensive car in the Yaris line-up, so you have to weigh that against the potential savings you’re going to make on the road – as well as the all-important ‘feelgood factor’ of running a car that’s kinder to the planet. 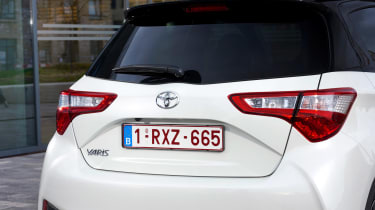 Elsewhere, the entry-level 1.0-litre petrol engine returns a respectable 49.9mpg, while the more powerful 1.5-litre petrol achieves 48mpg. For the record - and to no one's surprise, we imagine - the GRMN hot hatch is the least economical Yaris, with an official combined figure of just under 38mpg. However, if you make regular use of its full performance, you can expect to get much less than that.

Insurance ranges from group 8 to 9 depending on which model you pick (although the GRMN is yet to be assigned a group, and we expect that to be considerably higher), so few drivers are likely to be put off buying a Yaris by the potential cost of cover. By way of comparison, the entry-level version of the outgoing Peugeot 208 sits in insurance group 7, and while one version of the Ford Fiesta qualifies for group 3 cover, most models sit in groups 11 or 12.

Residual values for the Toyota Yaris remain relatively strong, in spite of the plentiful numbers for sale on the UK used car market. Clearly, the reputation the car has built up for practicality and efficiency is attractive to second and third owners, too.