Audi's new A4 is looking to claim compact exec honours from the 3 Series, C-Class and XE

Audi has listened to criticisms and thrown all its knowhow and expertise at the new Audi A4. The ride, handling and craftsmanship enhancements deliver remarkable progress that rivals struggle to match. The improvement made by any previous A4 model over its predecessor has never been this great but the margins at the top of the compact executive class are narrower than ever.

“Twelve million people cannot be wrong,” not our words, but the words of Rupert Stadler, the man at the helm of Audi, on the subject of the Audi A4 and its spiritual predecessor the Audi 80. The 3 Series rival is one of the German car giant’s biggest players, with one in every five Audis sold globally being an A4 – so, no pressure on the all-new model, then.

Now in its fifth generation, the A4 arrives in a compact premium segment that already looks fit to burst, with BMW, Mercedes and Jaguar all fighting for the same customers. Audi is aware of this, and to ensure it remains top dog at the premium end of the market – in spite of what may look like a car not too dissimilar from the one it replaces – has radically overhauled the A4. 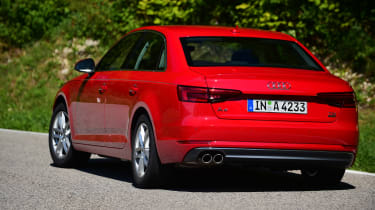 From the engines and platform, to the wing mirrors and tail lamps, 90 per cent of the A4 has been completely replaced – the rest fine tuned. That means it’s faster, lighter and more spacious than it was before.

Crucially it’s also more fuel efficient. Three petrol and four diesels make up your engine options, with capacity ranging from 1.4 to 3.0 litres and power from 148bhp to 268bhp for now. Company car buyers will be enticed by the fleet of fuel-sipping Ultra models, while those after something with a bit more urgency will be pleased to hear the S and RS variants will arrive sooner in the A4 production cycle than they have done previously. 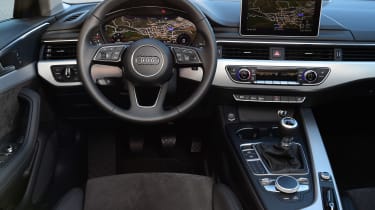 Here we have the 187bhp 2.0-litre TDI Ultra, paired with a six-speed manual gearbox. In mid-range Sport trim it will set you back £31,000, slightly more than the equivalent 3 Series but less than the C-Class and XE. And that’s a theme that continues down the spec sheet, from running costs to performance to practicality. Where the A4 has the upper hand in terms of efficiency with 72.4mpg and 102g/km, the BMW takes a swipe back with better performance figures, while the Merc pips them both with a fraction more rear passenger space.

You can scrutinise the finer details such as specification and residual values, but the difference between the four big hitters has never been so close. Where your money goes may simply boil down to image or personal preference, yet if you’re swayed by the ability of your compact exec on the road that decision could be made significantly easier. 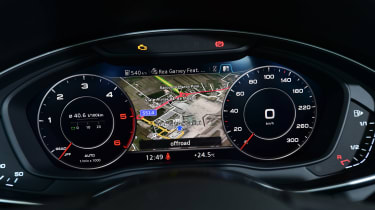 Audi has taken a renewed approach with the A4. Rather than another attempt at matching the 3 Series for engagement, Audi has softened the A4, made it easer to live with and in the process added the finesse that has long been missing.

It takes less than 100 yards before you discover the A4’s renewed sense of character. Where the outgoing model felt rigid and compromised, the newcomer immediately feels more refined and forgiving. The new MLB platform and more sophisticated five-link fully independent front and rear suspension go some way to encouraging the transformation – helping absorb bumps without upsetting composure.

Toggle through the Audi Drive Select system that tailors the car to Efficient, Comfort and Dynamic setups, and even in its sportiest setting there’s little tradeoff in terms of comfort. If anything, in Dynamic mode the body control is even better, it feels more tied down which gives a greater sense of stability through faster bends. There’s also plenty of performance to make sure you can get around them, too. The muscular band of torque arrives from 1,750rpm and paired with the slick six-speed manual, makes for brisk progress – 0-62mph takes 7.7 seconds. The engine doesn’t feel strained or coarse when extended either, not something you’ll experience in the C-Class. 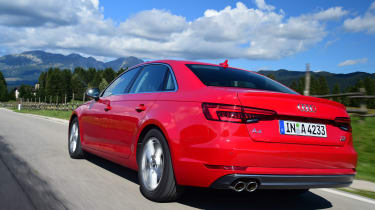 The steering – a big criticism of the outgoing model – remains light but has a far greater rate of response. It perhaps isn’t as crisp as the setup in the XE, but it’s a world away from what you had to put up with previously.

So too is the interior. Audi has always had a strong reputation for crating beautiful but functional cabins, but the new A4 takes it up a notch. The touch-sensitive controls, brushed aluminium detailing and fantastic virtual cockpit could turn the most arduous of journeys into ones that can be enjoyed. Passengers in the back will have less to complain about, too. 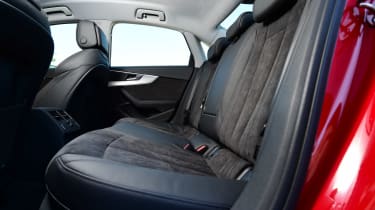 The new A4 is longer and wider than it was before, and rather than use that extra space to increase boot capacity – which remains at 480 litres – Audi catered for those in the back with a more roomy cabin. It makes the XE feel like a hatchback and even with the slightly raised middle seat and bulky transmission tunnel, three adults back there will be more than comfortable.

It’s also real tech fest inside, with Audi offering adaptive cruise control featuring traffic jam assist which can work up to speeds of 155mph. Perhaps what’s more impressive is that the system can also control the steering at up to 40mph by using radars and ultrasound sensors to read the surrounding area, guiding the A4 around bends in the road.