Ultra-efficient diesel makes newcomer a force to be reckoned with 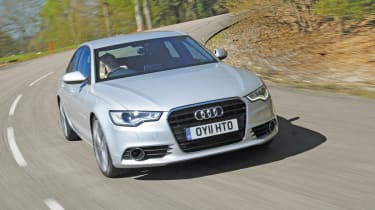 Our gripe with the old A6 was its uncomfortable ride, but the new model remedies this – as long as you avoid the Sports suspension. Plus, it ups its game elsewhere. This 2.0 TDI will be the big seller, and is on a par with the 5-Series for efficiency. It can’t match the BMW for driver engagement, yet with front and 4WD models to choose from, is a smarter choice when the weather turns. Interior quality is without peer and the understated styling is exactly what Audi’s customers ask for.

Forget about subjective matters like handling, comfort or looks. The key factor in ensuring the sales success of the new Audi  A6 2.0 TDI is its 129g/km CO2 output – unbeaten in this class.
Little wonder, then, that of  all the A6s sold in the UK, three-quarters will be this model. Part of the reason for the improved efficiency is reduced weight:  20 per cent of the latest Audi’s surface area is now made from aluminium, meaning it tips the scales at an impressive 1,575kg.
Video: watch CarBuyer's video review of the Audi A6

[[{"type":"media","view_mode":"content_narrow","fid":"69309","attributes":{"alt":"","class":"media-image"}}]]
Its nearest rival is a whopping 140kg heavier – equivalent to carrying two grown men in the car with you everywhere you go. This weight saving also benefits agility, and the new A6 does feel light on its feet considering its size. It changes direction eagerly, yet has excellent poise, balance and grip.
As with other Audis, we could complain that the electric power-steering seems a bit light and lacks feel. But does this really matter on a car that will probably spend most of its time commuting on motorways or in traffic en route to business meetings? To most people, no. Audi has managed to address another long-standing criticism about its models, and it’s one that’s far more important in this sector: ride comfort.
At last, when driving an A6  on a poorly surfaced road, you  no longer feel as if you’re sat inside a cocktail shaker. But while the suspension deals well with bumps, it’s still firm enough  to provide impeccable body  control in fast corners. A word  of warning, though – avoid the Sports suspension, as it ruins  the ride for little dynamic gain.
The same applies to large  alloy wheels. Yes, they look great, but they will impair comfort.
Steer clear of those pitfalls and the A6 is a relaxing car. Thanks to excellent soundproofing and an aerodynamic body, it’s also  very quiet at speed. The engine  is refined, too, although at idle  it gives off some diesel clatter.  Yet while there’s sufficient  punch for overtaking, the BMW 520d feels more powerful.
Annoyingly for Audi, the 5-Series has exactly the same emissions and economy figures as the A6, too – right down to the nearest decimal place. Also, as it’s rear-wheel drive, the BMW  is more engaging from behind  the wheel and there’s no torque steer – something from which the A6 suffers when accelerating hard out of a tight turn.
However, the Audi is less  likely to leave you stranded if  we have another bad winter, especially if you go for the added grip of quattro all-wheel drive.
To our eyes, the A6 is the better- looking car, and as ever the cabin is impeccable whichever trim you go for. The dash mimics the layout in the super-desirable A7 coupé, and everything has that unrivalled Audi solidity none of the marque’s German rivals can quite match.
The clincher, though, is the equipment list. Yes, there are options galore, but cunningly, even the entry-level SE model comes with sat-nav as standard  – which means the A6 represents the best value in this class. As a result, this new Audi won’t only be a hit with company car drivers; private buyers will love it, too.