The Subaru Impreza is coming back to the UK. We look at the best and worst cars to carry the famous nameplate. 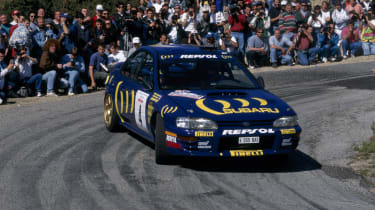 With the Subaru Impreza returning to the UK in May 2014, fans of Subaru's legendary boxer-engined family car will be disappointed to know that the only model available will be a 1.6-litre petrol hatchback with no turbocharger.

Thankfully, Subaru has not forgotten that the Impreza rose to fame on the back of a string of high performance 4x4 turbo versions, cars that also carved out an enviable history in the World Rally Championship. Shortly after the Impreza's UK comeback, Subaru will also be introducing the WRX STi - the all-wheel-drive performance car that Impreza fans have been waiting for.

First shown at the Detroit Motor Show in early 2014, the four-door saloon with its famous WRC-influenced blue and gold colour scheme confirmed the Impreza proper is back - despite the Impreza name being dropped for the WRX STi version.

In celebration of its return, we take a look back at the cars that fired the Impreza name to greatness. 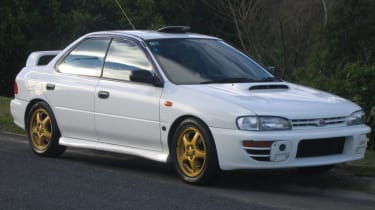 Largely thanks to the late Colin McRae drifting his yellow and blue Impreza to the 1995 WRC title, the Impreza Turbo changed Subaru's fortunes overnight. Introduced in 1992, the standard Impreza was nothing special, but the Turbo - and high-performance WRX STi models that arrived in 1994 - provided rally car thrills for the fraction of the price of your regular sports car.

The UK market was also saturated with 'grey' import Imprezas at significantly lower prices than official UK cars. In addition to the Impreza's low price, Subaru's tough build quality made it a brilliant all-rounder. The Mk1 also paved the way for the original limited edition Imprezas, which included the 22B and RB5.

Based on the WRX STi model and introduced in 1998, the Impreza 22B was a wide-bodied coupe made to celebrate Subaru's third WRC manufacturer's title. Only 424 22B cars were built. In 1999, Subaru made 444 WRX "RB5" models to celebrate Richard Burns' return to its WRC team. These cars were finished in a grey paint scheme, and most had Subaru's WR Sport Performance Pack - an option which included a new ECU and exhaust system.

Another of the most popular special editions which emerged from the Mk1 Impreza was the P1. Limited to a run of 1,000 and with a body similar to the 22B, the Impreza P1 was symbolic of the tie-up between Subaru and Prodrive.

It was the Mk1 Impreza which also began the rivalry with the Mitsubishi Lancer Evolution which would come to define both cars. 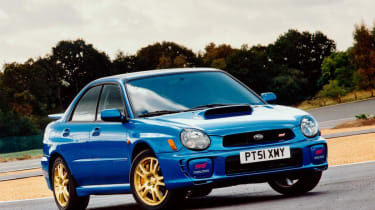 By the time Subaru launched its second-generation Impreza in 2000, the car had proved its worth in the WRC and the showroom thanks to its cult following.

Unfortunately, and for reasons still shrouded in mystery, Subaru gave the first generation of the best-selling car in its range a pair of bug-eyed headlamps that divided opinion among fans.

Thankfully, in 2003, Subaru revised the Impreza's front end, returning to a more sober appearance. It also played it safe in 2006 in applying its new corporate front-end to the Impreza.

With the Mk2 Impreza, Subaru once again upped the ante in the power stakes, increasing the output of the Impreza WRX's turbocharged, flat-four boxer engine to 221bhp in 2003, and 230bhp in 2005.

The Mk2 variant of the Impreza WRX STi had 281bhp on tap. The most well-known special edition of the second generation Subaru Impreza was the 'WR1' which was built to celebrate Petter Solberg's 2003 WRC title win. These 500 WR1 cars all had ice blue paint, a revised ECU, plus exhaust and catalytic converters which saw power output increase to 316bhp.

In 2007, Subaru released another WRC themed special edition Impreza, the commemorative RB320 model, which paid tribute to the 2001 World Rally Champion after he passed away in 2005. 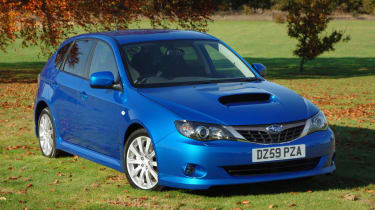 In the eyes of many fans, Subaru committed another visual blunder with the Mk3 car as it decided to move away from the classic Impreza four-door saloon format. In an attempt to broaden the Impreza's appeal beyond the performance car bracket, Subaru presented the latest incarnation of its iconic car as a bland-looking five-door hatch that left fans particularly upset.

The WRX model had 230bhp, but it was the 2008 WRX STi that captured the spirit of the original, despite having begun to trail the Mitsubishi Evo and the latest crop of thoroughbred hot hatches in the performance-saloon stakes. Subaru did introduce a saloon version of the Impreza WRX STi but dropped the Impreza moniker to set it apart from the underwhelming hatch models. Anxious to restore some sporting credibility to the Impreza, Subaru teamed up with Cosworth to produce the STi CS400 which had 395bhp, and reached 0-62mph in a staggering 3.7seconds.

Due to poor sales and its inability to match more modern rivals in terms of interior quality, performance and emissions, Subaru pulled the plug on the Impreza in the UK at the end of 2013.

Can the new Subaru Impreza bring back the glory days? Tell us what you think in the comments section below. 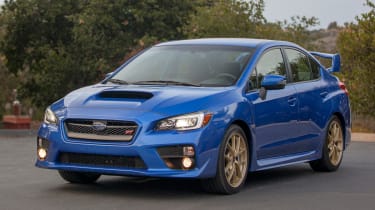