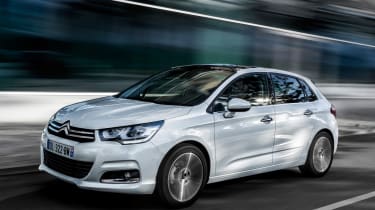 The automatic gearbox further emphasises the Citroen C4’s failings in a tough modern-day family car market. It’s slow to react and feels archaic next to VW’s slick-shifting DSG, while the lack of manual control will disappoint keen drivers. The new petrol engine is quiet and refined, though, and should be better suited to the standard six-speed manual.

Designed to deliver up to 25 per cent better fuel efficiency, the 128bhp PureTech petrol with the new six-speed EAT6 automatic transmission replaces the previous VTi 120 four-speed automatic and the THP 155 ETG6.

Around town, the hum from the quiet petrol engine is barely noticeable, while the auto ‘box allows for smooth progress if you’re gentle on the throttle. However, prod the accelerator too hard and you’ll catch both engine and gearbox unawares, resulting in frustrating delays and jerky movements. 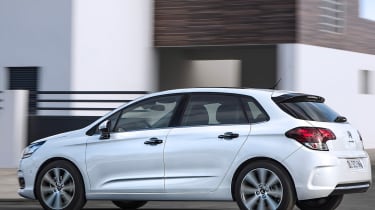 It’s a similar story as you build speed, too. If you’re careful and allow the gearbox time to react, it’s quite a pleasant driving experience. The turbo makes the C4 feel quick, but the problem comes when you want to overtake and need the gearbox to kick down. Where a DSG dual clutch always feels ready, the EAT6 system seems to panic, never knowing exactly which gear it should be in.

Shift it into sport mode and the problem is compounded. There are no steering wheel-mounted paddles, and in auto mode we found it held on to gears a little too long, often changing down mid corner and lurching forward - causing disruption to the car’s balance. This is made all the more unsettling when added to the C4’s naturally lazy suspension setup, relegating this mid-sized Citroen to the bottom of the class for driving dynamics. 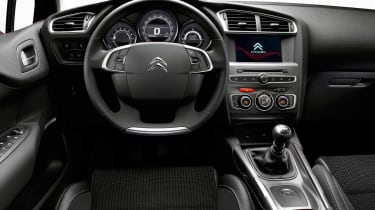 For those who need an auto for town driving or stress-free long-distance driving, we’d recommend taking a look at one of the VW Group’s seamless DSGs (like in the VW Golf). Ford’s Powershift isn’t bad either, and both make this EAT6 system look like old hat in comparison.

Unfortunately all the issues we raised when driving the 118bhp 1.6-litre Blue HDi diesel stand true with this newly appointed petrol, too. The suspension is too soft, the styling is dull, and the rear seat space is below par for this class. Prices are competitive, though, with this top-spec petrol starting at just £18,245. The auto ‘box will add another £1,100 – money far better spent on the £440 integrated nav. 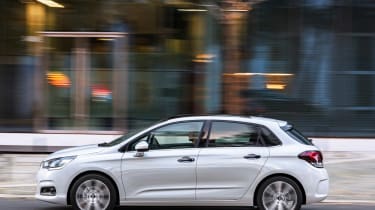 That said, the three-pot turbo feels like a breath of fresh air in a largely despondent model range. The diesel will still suit most buyers, but this petrol is perfect for those who want a quiet but frugal alternative for shorter journeys. It’ll do an impressive 57.6mpg and returns 113g/km of CO2, making it slightly cleaner than a similarly powered Nissan Pulsar DIG-T.

We’re looking forward to trying the three-cylinder engine with a manual gearbox, but for now the automatic petrol is not a combination we can recommend.