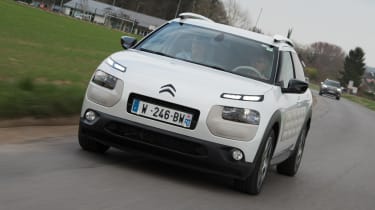 For decades Citroen was renowned for building uniquely comfortable cars. A large part of that was due to the complex hydropneumatic suspension system fitted to many models ever since the original DS of 1955 – giving what became known in the industry as a “magic carpet ride”. Unfortunately, the cost and complexity of the system meant only slow-selling larger Citroens could benefit, and it’s been gradually phased out as a result.

Recently, though, there have been signs that Citroen hasn’t totally abandoned its philosophy. The quirky, softly sprung C4 Cactus was the first step but the French brand will take things even further with innovative comfort-enhancing tech. We headed to Paris to sample a prototype C4 Cactus and get a taste of things to come. 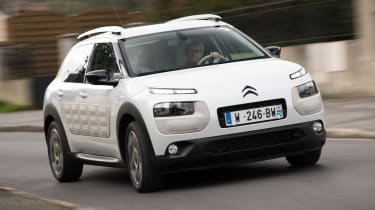 Called the Citroen Advanced Comfort Lab, its been built as a technological preview rather than a specific new car. Most of the tech will make it to the updated 2018 C4 Cactus when it arrives at the end of the year, however, before rolling out across Citroen’s future range. From the outside, it’s almost entirely the same as today’s crossover, though the prototype stickers give an indication that what’s going on underneath is beyond the norm.

Inside, designers wanted to build on the existing lounge-style seating arrangement, starting with an overhaul of the seats. The generously padded new chairs are, so we’re told, inspired by the world of bedding. With several layers of specially selected foam and redesigned springs, Citroen has managed to create a sumptuous ‘memory foam’ mattress-like feel without (in theory) compromising on passenger safety or long-distance posture support. 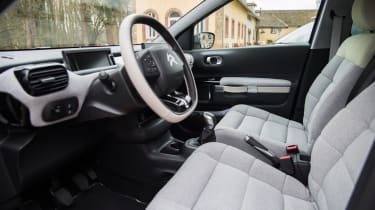 As well as being nicer to the touch the seats had to look comfortable – Citroen’s research suggests that if a seat is visibly soft it enhances the mind’s perception of comfort. To that end, the silky grey cloth is replicated on the dashboard, doors and roof lining, while thicker carpets also feature. It’s a considerably more inviting place to spend time in than the regular C4 Cactus, which is hardly sparse in itself.

Even cleverer things have been achieved under the skin. There’s a new type of structural bonding adhesive used which Citroen says will help improve body stiffness by up to 20 per cent on future models, while there’s also new powertrain mounts, improved tyres, thicker glass and better insulation to boost NVH levels.

But the big news is the innovative new suspension system. As announced last year, Citroen will gradually replace its traditional suspension system with a new ‘Progressive Hydraulic Cushion” assembly – which we’re sampling here. Essentially, it replaces the traditional solid bump stops with secondary dampers filled with hydraulic fluid, which control big suspension movements and allow the spring rate to be relaxed. This is meant to benefit the absorption of potholes and speed humps while also improving control over smaller surface ripples. It’s also substantially cheaper to produce than the old hydropneumatic system, meaning everything from city cars to big SUVs can be fitted with it. It’s so innovative, Citroen has applied for 20 patents for the new tech.

How does the Citroen Advanced Comfort Lab drive?

Our test route took in some terribly rutted rural roads outside Paris – the kind you find quite often in the UK. We drove a standard C4 Cactus alongside to compare (itself hardly uncomfortable) and the difference was nothing short of remarkable. Where the standard car crashed and fidgeted over surface imperfections, the hydraulic setup glided pleasantly and stayed largely level. Over sizeable speed bumps there was a noticeable reduction in suspension movement and noise, too – it feels more like a luxury SUV than a small and light crossover. 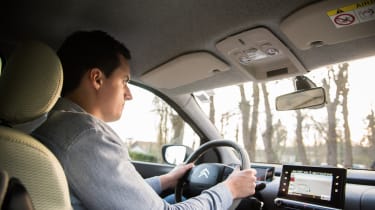 Just as impressive was the refinement improvements. There was markedly less road noise and suspension thud, while noise and vibrations from the three-cylinder petrol engine felt more deftly isolated – without the engine’s vocal character being totally lost.

The team ­– who have been working on the tech for three years­ ­– admit that some changes will be made for production, however, and Citroen’s marketing department still has to sign it off. The new suspension system will receive some tweaks to make it more cost-effective to mass-produce, too. Our only concern is, as a result, some of the work that’s gone into this will be watered down when the first production model arrives at the end of the year.