Under the 3008’s sharp exterior is Peugeot’s EMP2 platform. This scalable chassis architecture’s record is strong, as the 3008 SUV and the 308 family hatch that use it have claimed the title of European Car of the Year.

The platform is shared with sister brand Citroen, and has meant both French firms have made big strides in lots of areas. In the 3008, the EMP2 platform helps to boost packaging and practicality – a must-have for any family SUV.

Peugeot has clearly focused on balancing this usable edge with an upmarket feel, as the design, layout and material quality all feel a step ahead of some rivals. The cars offer functionality, but it pulls it off with a bit of panache when compared to other cars in the class.

The Peugeot 3008 is a five-seater only (if you want seven seats, you'll need to choose the 5008 instead), with the five-door layout that's normal for any car in this class. There’s no 4x4 option, but some cars can be fitted with the optional Grip Control system, which gives some modest extra off-road ability without taking a toll on fuel economy. Just don’t head too far away from tarmac. 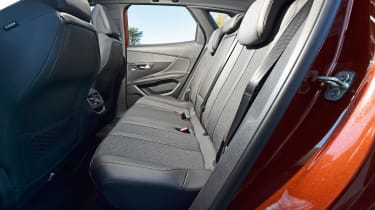 Visibility isn’t bad, as the driving position is quite high, but as in most cars in this class, the rearwards view isn’t the best thanks to the small rear glass area. The narrow-diameter steering wheel is a bit of a contentious point, but with this second iteration of the i-Cockpit layout Peugeot has refined the concept, so it’s more user friendly. It’s easier to see the digital dash, which comes as standard on all models, adding a hi-tech feel together with the central screen.

The cabin layout is more sculptural than some rivals’ so there isn’t quite as much versatile storage, but the Peugeot still features plenty of cubbies to store phones and wallets, along with a large central cubby that doubles as an armrest. There's also space for a wireless smartphone charging point on GT-Line and GT specs; it can be added to other models as an option

Hop in the back and you’ll find that the 3008 actually has plenty of space, even if it doesn’t seem like it from the driver's seat. It’s slightly longer than a Qashqai, so there’s plenty of legroom in the back seats, and headroom shouldn’t be an issue for anyone but the tallest passengers.

Occupants in the back don’t get quite as much legroom as in a Renault Kadjar. Then again, the flat floor means the Peugeot is a comfortable choice if you regularly carry three passengers in the rear, as no one will be fighting for foot space. 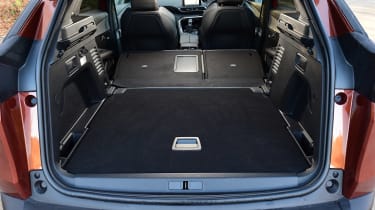 Open the large tailgate and you’re confronted by a low load lip, wide opening and cavernous 591-litre capacity. The boot lacks the Kadjar’s clever solutions, but it’s well shaped and has a small amount of storage under the floor, which can be lowered for more space or raised to create a flat base when the rear bench is folded.

The 3008’s boot space dwarfs the 430-litre load area in the Nissan Qashqai, and beats the 510-litre space in the SEAT Ateca, and the Skoda Karoq only comes close with a 588-litre capacity with the back seats slid all the way forwards. The advantage isn’t as great if you fold the rear seats down, but the Peugeot’s maximum 1,670-litre load bay is still ahead of its rivals.

The boot also features a fully removable floor and a full-sized spare wheel, plus a handy storage net for keeping items steady in the back.

It’s also able to tow up to 2,000kg (braked trailer) in 2.0-litre diesel form, although that shrinks to just 1,200kg in a car with the 1.2-litre petrol engine and an automatic gearbox. Pick your engine carefully if you’re planning to tow any trailers or caravans.