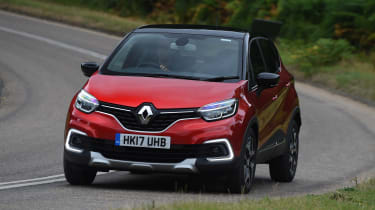 The revised Renault Captur remains a sensible choice in the compact crossover market. The updates are subtle but do just enough to keep it fresh, and this entry-level turbo petrol offers the best blend of refinement and running costs. However, with a glut of new rivals on the way – including intriguing options from SEAT and Ford – the French brand’s sales dominance could soon be under serious threat.

The Captur crossover is now Renault’s best-selling car, having overtaken the Clio supermini in the race for sales supremacy, and it found more homes across Europe last year than any of its key small SUV rivals.

To keep that momentum going, the French maker has given the Captur some mid-life updates, including a new look inside and out. There are no mechanical changes.

Bold Megane-inspired LED running lights are key to the update, while a fresh set of headlamps and chrome detailing further emphasise the design at the front. Changes are more difficult to spot towards the back, where the revised tail-lights are your only clue to the new car. 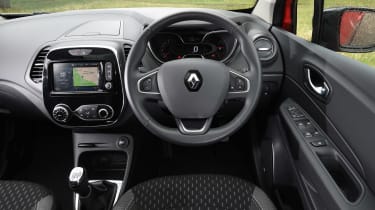 We’ve already tried the frugal diesel back in May, and now we’ve got the popular petrol model in the UK to see if it makes more sense for British buyers. Our car featured the entry-level 0.9-litre TCe 90 turbo, in high-end Dynamique S Nav trim.

Also fitted to our test model was a new panoramic roof, which floods an otherwise grey cabin with plenty of natural light. It’s a £400 option on Dynamique S cars, but a worthy extra alongside the bold Flame Red paint (£650). Renault claims to have added more soft-touch materials to the cabin, but while fit and finish are good, rivals such as the upcoming SEAT Arona and Ford Fiesta Active are expected to bring a new benchmark for quality in a few months.

The infotainment system disappoints, too. The screen isn’t the most responsive, and the menus can be tricky to navigate. Android Auto smartphone connectivity is available, but Apple CarPlay isn’t even on the options list. The Bose Premium stereo is excellent, however, and comes as part of the £1,200 Techno Pack. This also adds TomTom sat-nav and a reversing camera.

This TCe 90 is the same engine as found in Nissan’s latest Micra, and can feel a little jerky around town. There’s little urgency at low revs, with peak power not available until 5,000rpm. The torquier diesel is smoother and offers greater punch at high speed – but it’s noisier and more expensive.

The petrol car claims 55.4mpg and emits 114g/km of CO2. A naturally aspirated Citroen C4 Cactus 1.2 PureTech 82 offers similar performance but is more efficient (61.4mpg), while the more powerful PureTech 110 turbo is punchier and even more frugal – claiming 65.7mpg. That car is also available with an automatic gearbox.

A sixth gear would help the Captur’s high-speed refinement, as would a little extra power. But if you spend most of your time in the city, the TCe is a top pick. It’s comfortable, quiet and economical, and in basic Expression+ spec costs £15,355. The cheapest diesel is over £2,000 more.

It rides well, even on our test car’s 17-inch wheels; soaking up potholes without fuss. Speed bumps go almost undetected, in fact, making the Captur much more compliant than the Clio on which it’s based. However, while the steering is direct, there isn’t much feedback, and a Peugeot 2008 feels more agile.

Practicality is unchanged. The Captur has a 455-litre boot that expands to 1,235 litres with the rear seats down. A front-wheel-drive Peugeot 2008 offers 360 litres with the seats up and 1,172 litres when they’re folded, but space in the back is better. 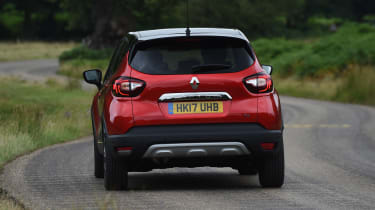 Click on the gallery above to see more of the facelifted Renault Captur...