With decent residuals and affordable company car tax costs, the Mazda 3 is competitive when it comes to running costs 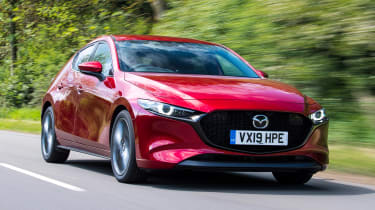 We recorded a figure of 41.4mpg over 464 miles in the SkyActiv-G-engined manual Mazda 3 used in our most recent road test, which is a number very faithful to the 45.6-44.8mpg figure claimed by the manufacturer. It’s an impressive figure for a naturally aspirated engine, assisted not just by the standard mild-hybrid underpinnings but also by the long sixth gear. At a motorway cruise, the drivetrain isn’t at all stressed, which helps return those favourable numbers.

The SkyActiv-X petrol engine serves up the best combination of efficiency and performance, with Mazda claiming up to 51.4mpg in the front-wheel-drive manual specification car we’d recommend. In the real world, it’s little more economical than the SkyActiv-G, but it is a far better performer without any real trade off in fuel economy. Even the all-wheel-drive version is said to return a respectable 47.1mpg.

The 1.8-litre SkyActiv-D diesel engine remains out front as the most frugal option of the bunch, capable of up to 56.5mpg in saloon manual guise.

Opt for an automatic Mazda 3 and naturally fuel economy takes a slight hit across all engine types. Economy drops to 43.5mpg (best case scenario) for the automatic SkyActiv-G model, and 45.6mpg for the front-wheel-drive SkyActiv-X. All-wheel-drive buyers can expect 42.8mpg, and automatic diesel buyers will see around 50.4mpg should Mazda’s figures be truthful.

All SkyActiv-G versions of the Mazda 3 produce between 117-128g/km of CO2, and due to the mild-hybrid system, it commands an annual VED rating of £135 (after a year one payment of £170). Benefit in Kind rates for business buyers range from 27 to 29 per cent – on the money for this sort of car. The SkyActiv-X Mazda 3 is also a mild-hybrid, commanding the same £135 annual rate after year one. It’s easily the most tax friendly model both for private and fleet buyers, thanks to benefit in kind rates ranging from 24 to 29 per cent. 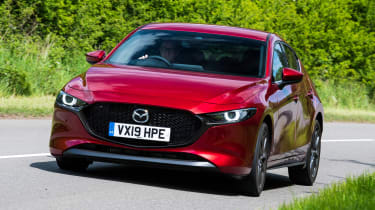 Manual diesel models emit between 107-109g/km, and with the diesel surchage, Benefit in kind rates rise up to 33 per cent depending on specification and equipment, so fleet buyers need to work out if the tax they’ll pay will outweigh any potential fuel savings.

The Mazda 3 occupies insurance groups 15, 16 and 17, with SE-L and GT Sport Tech models bookending the top and bottom of the range. This is more or less in-line with most rivals, although the broader engine ranges offered by the likes of SEAT and Volkswagen see their family offerings break into the 20s.

Our experts predict that the Mazda 3 will retain around 42 to 46 per cent of its value after three years and 36,000 miles. By contrast, the ever-popular Volkswagen Golf can’t quite match the Mazda in this area – its 36 to 44 per cent range isn’t quite as strong, which is interesting given that car’s punchy list prices.