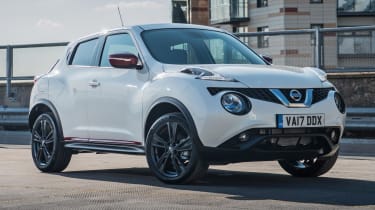 Nissan has launched a special edition version of its top-selling Juke supermini crossover. The Juke Envy is a special version that slots into the range above the well-specced N-Connecta grade, and adds some extra styling cues to help it stand out.

The exterior upgrades include gloss black front and rear bumper inserts, inserts for the standard-fit Xenon headlights and 18-inch alloy wheels with gloss black inserts. The wing mirrors get red covers and the optional Style Pack adds extra trim to the door and boot sills. The styling upgrades continue in the cabin with red interior upgrades throughout.

The Juke Envy is available to order now, and is offered with two engines – the 1.2 DIG-T 115 petrol and 1.5 dCi 110 diesel. They cost £19,045 and £20,650 respectively, which is £670 more than N-Connecta trim. Other standard kit includes Xenon lights, sat-nav with reversing camera, DAB radio and keyless entry and starting.

To mark the launch of the new model - and to celebrate the fact that there are now over half a million safety cameras on the road, courtesy of over 133,000 Jukes fitted with Nissan's Intelligent Around View Monitor system - Nissan has developed the world's first 360-degree dashcam. The JukeCam uses two different mounts, so it can either be used as a dashcam, or it can be removed and used as an action camera.

The device features 4k picture quality and can record up to 3 hours of footage on its internal memory. And to demonstrate the camera's versatility, Nissan joined forces with extreme pogo team Xpogo to set a new Guinness World Record. Xpogo used the JukeCam to record the stunt, which saw pogoer Dalton Smith jump over three Jukes in a row to set a record for jumping over the most consecutive cars on a pogo stick. See the video here:

At the moment, JukeCam is just a technology concept, but if enough interest is generated, then Nissan could add it to the Juke's kit list, probably in time for the next generation Juke, which is due to be revealed later in 2017.

Find out about the best dash cams on sale now... 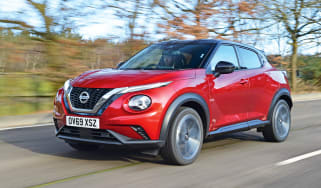 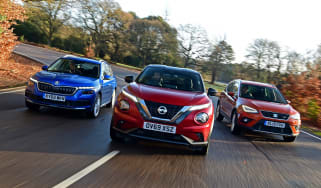