The 1.6-litre petrol is expected to be the best-selling version of the new Peugeot 208. We drive it 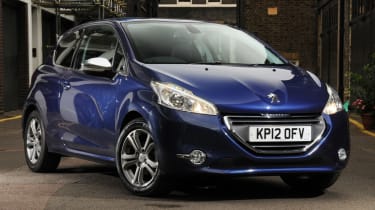 It’s easy to see that Peugeot has made a real effort to create a quality product in the 208, both inside and out. For the majority of the time it’s good fun to drive too, and while the ride may not be perfect and the engine might lack the zip of turbocharged rivals the 208 excels where it matters – style, value for money and luxury.

The Peugeot 208 has beaten the evergreen Ford Fiesta in our group test and scooped our supermini of the year award, so we’ve got high hopes for the predicted best-seller; the 1.6 VTi driven here.

It’s powered by a naturally-aspirated 1.6-litre engine with 120bhp, and is the second most powerful unit in the range behind the 155bhp turbocharged variant. It feels nippy around town and boasts a fairly rapid 0-62mph time of 10.9 seconds, but it can’t match the turbocharged kick of acceleration from the likes of Volkswagen’s 1.2 TSI.

Thankfully it’s almost just as efficient, with a fuel economy figure of 48.7mpg – compared with 53.3mpg for the less powerful Volkswagen. CO2 emissions stand at 118g/km, so road tax is free for the first year and only £30 thereafter.

Our well-equipped Allure model looks the part, too. We like the sculpted design of the 208 already but this car comes with chrome door mirrors, LED running lights and stylish 16-inch alloy wheels too. It’s a level of French chic matched only by the Citroen DS3.

Inside is a similar story, with gloss black plastics and brushed metals making for a classy cabin. There’s plenty of space too with just enough room for adults in the rear seats and a 285-litre boot.

A talking point is the small steering wheel, which is designed to give the 208 a sporty feel and it does work, but only to a point. At slow speeds it gives the impression you’re darting in to corners and helps create a sense of agility. However, ramping up the speed reveals the 208 to be less agile than you might think, and beaten in the corners by the Fiesta or Suzuki Swift.

And while on the whole it rides well, the 208 does have a tendency to thud into potholes that wouldn’t trouble a Volkswagen Polo. The 1.6 VTi 120 Allure three-door starts at £14,645, which is just £55 less than a Fiesta 1.6 Zetec S. But, while marginally cheaper than the Fiesta it’s also not quite as good to drive. In a style driven segment like this though, the 208 has the edge and for that reason, it’s certain to be a popular choice.