The 3008 has one of the best interiors in its class, with lots of kit

While the last Peugeot 3008 was a bit of a mess, the current car is a handsome looking machine. The upright grille and chunky bodywork give it a unique look, and it’s certainly a big step forward from the previous model. Whereas the Mk1 was an MPV-style crossover, this latest model is a genuine SUV. The detailed headlight and tail-light designs are stand-out features, and the steep windscreen, raised ride height and hidden C-pillars all add to the look.

Inside, the 3008 gets a superb interior. It wraps around the driver from the centre console to the door and, of course, incorporates Peugeot’s latest infotainment system with an 8-inch touchscreen. The small steering wheel and high-set instrument cluster that we’ve already seen in the rest of the company’s range also appear.

The difference here, though, is that the 3008 gets Peugeot’s latest i-Cockpit display, which incorporates a 12.3-inch screen behind the wheel. It’s similar to Audi’s Virtual Cockpit, and means you can change the layout of the dials, decide what is displayed and how or, most usefully, show sat-nav directions directly in front of you. 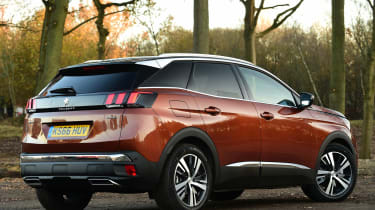 It’s an excellent arrangement, and unlike on many other Peugeot models, it’s easy to see over the top of the steering wheel. In fact, there’s not much that Peugeot has done wrong with the interior of the 3008, as it’s also one of the best-looking cars in its class.

The materials you touch are of great quality and the wrap-around design, with metal accents, gives the cabin a really upmarket feel. It doesn’t seem as spacious as a Nissan Qashqai or SEAT Ateca, but it’s much more stylish than either of those rivals, and the only minor setbacks are that the air-con controls are on the touchscreen display, which makes them hard to use on the move, and the materials lower down in the cabin are of lower quality.

Still, the unit’s processor obviously lacks some power, as the infotainment system can lag behind your inputs. At least the graphics have a fairly high resolution compared to the more grainy, pixelated screen you'll find on rivals such as the SEAT Ateca and Nissan Qashqai.

The 3008’s climate control system is adjusted through this display. It’s still not the best way of doing things, but is easier than in previous versions of the i-Cockpit as sat-nav and radio information can be displayed on the screen in front of the driver. 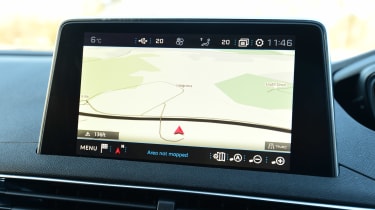