Does removing the roof of the new Porsche 911 add to the thrill? We find out

Like the new Carrera coupe, this 991.2-generation Porsche 911 Cabriolet is faster and more efficient than ever. It’s more usable, too, thanks to that new turbocharged engine, an improved chassis and some extra tech inside – but it’s not without its flaws.

Driving a convertible sports car should be an event. It’s about the theatre of stepping behind the wheel, lowering the roof to savour the atmosphere and firing up the engine to experience the noise. But what if that engine is now turbocharged?

That’s exactly what’s happened with the new 911. Like the coupe we tested, this facelifted 991 Cabriolet now uses a 3.0-litre flat-six turbocharged engine, rather than the larger naturally aspirated unit in the old car. But does that mean the days are numbered for the 911’s traditional bassy exhaust rasp? We jumped behind the wheel of the new entry-level £87,641 Carrera model with Porsche’s seven-speed PDK dual-clutch gearbox to find out.

The answer is mixed, as even with the optional £1,773 central-exit Sports exhaust, with the roof down the 911 doesn’t quite bark like you’d expect when you press the accelerator.

What it does do is leap down the road at an incredible rate. That’s thanks to the new engine’s extra performance. There’s 365bhp on offer, and a massive 450Nm – that’s 20bhp and 60Nm more than its predecessor, and it really shows. 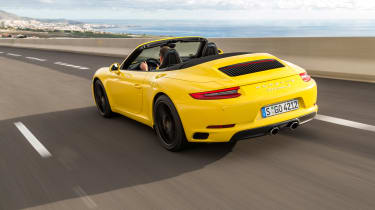 The extra torque is also available lower, from 1,700rpm to 5,000rpm, so the 0-62mph sprint is down to 4.4 seconds on this Sport Chrono equipped PDK car. The big benefit is you can now leave the 911 in gear and let it pull out of bends, whereas before you’d have to be wringing the engine’s neck to maximise performance.

Rev it to the lower 7,500rpm rev limiter and there’s still lots of fun to be had. However, the extra spine-tingling rasp from the old car, revving out that bit further, has gone. And with the breeze sucking the noise backwards away from the cabin on the move, it’s hard to hear the engine – the most noticeable sound is the sucking and whooshing of the turbos. It’s actually noisier with the roof up, as you hear the engine howling from the inside, punctuated by rapid-fire shifts on the swift and smooth PDK gearbox and a nice crackle when you lift off the accelerator.

Like the coupe, Porsche’s PASM adaptive dampers now come as standard, so while the ride height is 10mm lower than before, with Normal and Sport modes giving a wider breadth of capability, this 911 Cabriolet is even more comfortable and a better performer on the right road. 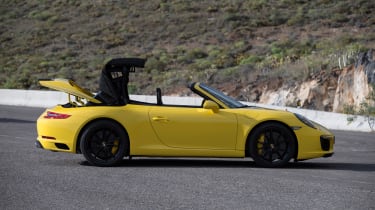 While it works in the coupe, chopping the roof off here means the 911 feels fidgety on bad roads. It’s a good cruiser, but the chassis wobbles when you push it harder in corners – as the grip and g forces build, you can feel the structure flex. It’s not the most reassuring feeling, and in Sport mode it’s even worse. The ride only settles down on smooth roads. At least with the wind deflector up there’s not much buffeting in the cabin, even at motorway speeds. In fact, put the roof up and it’s almost as refined as the hard top, with not much wind whistle from around the door seals either.

The basic cabin layout is very similar to before, but Porsche has added a new infotainment system with a new seven-inch touchscreen. It’s smarter, too, and works like a smartphone, recognising swipe gestures, for example. 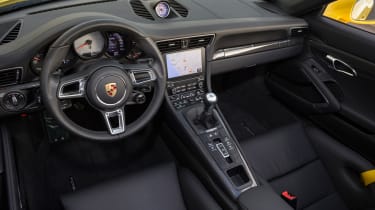 It works in conjunction with Apple CarPlay and Porsche’s new Car Connect app that gives users the ability to check functions on their cars remotely, like remaining range. On top of this, real-time traffic info and online navigation is now standard on the 911.

Continuing the Porsche’s extra usability, the engine is now even more efficient, thanks to those turbos. If you’re in the market for a near £90,000 convertible, fuel economy might not be at the top of your wish list, but returning 37.7mpg and 172g/km CO2, it boasts respectable running costs. 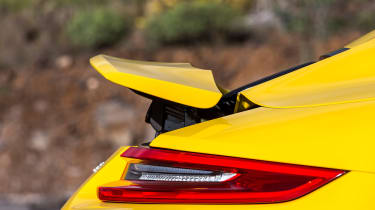 Like the fixed-roof 911, then, the Cabriolet is faster, more efficient and more usable with a 145-litre boot underneath the low nose. But also like the coupe, this 911 Cabriolet has lost a little of its top-end thrill, replaced by explosive mid-range performance.

However, out-and-out driving matters less here. It’s about the experience in a soft top, and while the looks are still there – improved by some styling tweaks all over – the noise has been dampened down a few decibels, which might put a few traditional 911 Cabriolet buyers off.