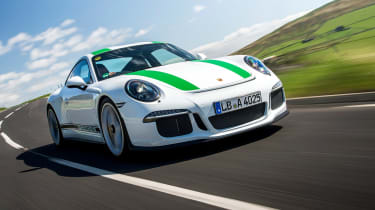 For the purist, the 911 R would appear to be absolute perfection. The engine and manual gearbox are outrageously addictive, the performance almost savage and yet there’s an old-school delicacy to the chassis. There’s been plenty of hype surrounding this car, and it certainly lives up to it; the 911 R offers a rare and unforgettable intensity and a freakish depth of ability.

Porsche's extreme GT department just keeps churning out better and better cars. It's part of the same Motorsport division responsible for the bonkers Cup, GT3 and RSR versions of the 911. The GT department ignores refinement and comfort in favour of excitement, speed, and handling, which combines with Porsche's obsessive and proven attention to detail. If you’re looking for the ultimate road and track model, nothing quite ticks the boxes like a 911 GT3 or GT3 RS.

Fast, engaging and incredibly durable, these cars are highly sought after and tend to command vast premiums due to limited build numbers. In other words, customers love them to bits – and now there’s a new one. It’s called the 911 R, and just 991 will be built. The problem is, they’ve all been sold and despite the fact that no customers have actually received their 911 Rs yet, they’re reportedly changing hands for well over the £136,901 original list price. 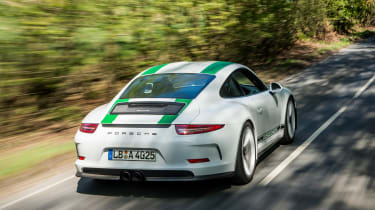 Essentially, the 911 R features a GT3 bodyshell and suspension components with the full-fat RS engine. That means there’s a 493bhp 4.0-litre flat-six and a noise straight out of a Le Mans car. It’s also very light, thanks to new carbon-fibre front wings, a carbon-fibre bonnet, a magnesium roof and plastic rear windows. It only has two seats and standard carbon-ceramic brakes, too. Most important, however, is the new six-speed manual box. Porsche says it’s been built for the ‘purist’.

Immediately, the R feels very different to a GT3 or GT3 RS. The steering is much lighter, and thanks to a new programme for the active rear-wheel steering, it feels faster, too. It’s super alert and almost nervous at first, while the ride is also more supple and the sense of locked-down invincibility is gone. Instead, the 911 R flows and bobs over the surface, with more of an old-school 911 vibe to it. You feel the peculiar weight distribution more keenly – which is just as 911 fanatics like it.

If the chassis feels reminiscent of 911s of old, the performance is very much of the moment. In fact, the 4.0-litre engine is utter madness. It seems louder than ever (thanks to engineers junking 4.5kg of sound deadening) and fires the R along any road with a savage glee. The manual gearbox – which is more positive and accurate than the seven-speed unit found in the standard Carrera – only adds to that impression, as you stick with gears longer, ride the torque and hold on for the final lunge to the limiter. 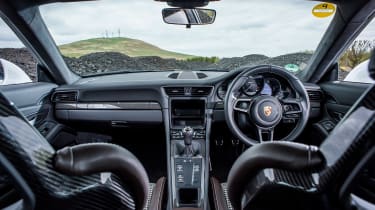 You just enjoy the engine’s breadth of performance more with a manual transmission, and that means you get to know every facet of its character better.

As you’d expect, the carbon-ceramic brakes are incredible; there are still vast reserves of grip and the R has almost unflappable composure. However, where the GT3 is almost so easy that it’s aloof – and the RS so extreme that it can feel edgy – the R is completely different. The steering is light, but as soon as you dial into its ways, there’s plenty of feedback and all the time you can sense exactly what the car is doing. Then there’s the gentle onset of understeer on turn-in and the sensation of that pendulous tail starting to work to counteract this. It’s all classic 911 stuff – only played out with even more composure and absolute security.

The 911 R is one of the most hyped cars of 2016, and although it doesn’t completely eclipse the GT3 and GT3 RS, it certainly delivers its own unique and thrilling take on the timeless 911 formula. As a driver’s car, there isn’t much out there that can touch it.