As well as being the fastest and most powerful 911 GT3 to date, this latest version is also the best. In just about every significant area it represents a step-change over the previous model, with better steering, a more sophisticated chassis and greater performance. It’s just a pity GT3 ownership remains such an exclusive and selective club.

The boss of Porsche’s ultra high-performance sports car division, Andreas Preuninger, has declared this latest Porsche 911 GT3 to be the best one yet. And given that there hasn’t been a single sub-prime example in the model’s 18-year lifespan, that’s a very bold claim. Having tested it extensively on the challenging roads of North Wales, however, we can confirm it’s also a fair one.

Rather than being an all-new model, this Porsche 911 GT3 is a thorough reworking of the version that came before it. The upgrades have been so exhaustive and far-reaching, though, that beyond the basic structure and mechanical layout there’s almost nothing in common between the two cars.

The normally-aspirated flat six-cylinder engine, for instance, has grown from 3.8 to 4.0 litres, with power up from 469bhp to 493bhp. Just about every component has been refined or replaced to reduce internal friction and improve efficiency. This latest development supersedes even the 4.0-litre engine that powers the exotic 911 GT3 RS. 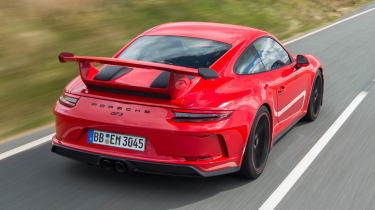 Aerodynamic efficiency has also been boosted; this new GT3 develops 20 per cent more downforce than the previous version with no increase in drag. The chassis and steering have also been subject to the same exacting scrutiny and refinement.

For the first time, buyers will have the choice between a seven-speed twin-clutch gearbox or a six-speed manual transmission (the previous car was auto only), giving the GT3 a much broader appeal among sports car enthusiasts. 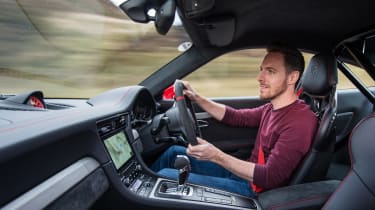 Having said that, buying one is not simply a case of walking into a dealership with your cheque book. If your local Porsche dealer hasn’t already invited you to buy a new GT3, you won’t be getting your hands on one without paying way over the list price for a lightly used ‘pre-owned’ car. That aside, the new GT3 is a high watermark for Porsche Motorsport cars. The steering, for example, is incredibly precise, with good feedback through the wheel rim. That’s despite it being electrically assisted, rather than the more communicative (but now old-fashioned) hydraulic set-up.

Being such a high-performance sports car with track-honed suspension, the GT3 does ride stiffly around town and on slow roads, but that improves markedly at higher speeds. In fact, the chassis is so well judged from a handling standpoint that it’s almost impossible to criticise. It smothers bumps and potholes in the road surface while keeping the body under tight control. The sticky tyres press firmly into the tarmac, giving unparalleled grip.

But the heart of the GT3 is its engine, which cleverly combines low-down tractability with a searing top end. It pulls violently from 5,000rpm, then builds to a dramatic and addictive crescendo between 7,000rpm and the head-spinning 9,000rpm red line. This is one of the finest high-performance engines of any car currently on sale. In fact, it’s one of the greatest powerplants ever – with a raw, intense soundtrack to match.

Manual versions won’t arrive until later in the year, so we’ve only sampled the twin-clutch PDK transmission for the moment. Fundamentally it’s the same unit as you’ll find in the pre-facelift car, but it’s been improved with faster shifts – also appearing smoother and more refined around town.

What the GT3 does so effectively is to combine immense technical ability with genuine character and charm. Being fun and engaging to drive, it’s so much more than a mere machine, and derived as it is from Porsche’s competition cars, it’s just as capable on circuit as it is on the road. 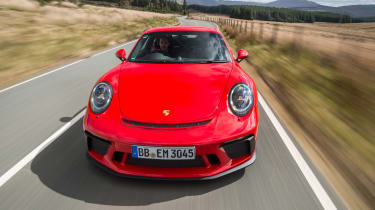 While many 911s come with a pair of token chairs in the rear, the GT3 is a strict two-seater. That cavernous space in the back can double up as a useful load area in addition to the sizeable front boot, however, just as long as you don’t specify the optional rollcage.

Other models in the extensive 911 range, meanwhile, are quieter and more refined for very long journeys, but given its incredible handling ability, the GT3 is actually very amenable over big distances. Even the optional bucket seats are comfortable enough to sit in for several hours at a time.

Even by Porsche’s own exemplary standards, the new 911 GT3 is a masterpiece. If you’re lucky enough to have your name down for one, there’s simply no way you’ll be disappointed.