If you want to feel part of a digital future, the Model S is sure to impress

Few cars we’ve driven attract as much attention as the Model S. But it’s the Tesla’s novelty factor and silent running that turn heads rather than its extravagant looks. Of course, as more and more appear on our roads, their exclusivity will no doubt waver.

With a low-slung luxury saloon shape that has a hint of Jaguar XF about it, the Model S isn’t a bad-looking car. Its wide haunches and sweeping roofline combine with optional 21-inch wheels to give it a sporty stance on the road. However, it’s inside that the Tesla’s futuristic wow factor really hits home.

Walk towards the car with the keyless fob in your pocket and the door handles pop out towards you. Swing open the wide driver’s door and the first thing you’ll notice is the huge 17-inch touchscreen on the dash, and another TFT screen in the instrument cluster. 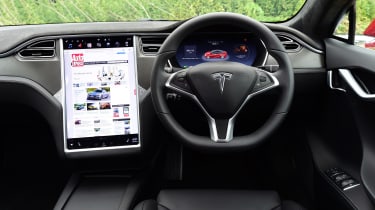 The rest of the cabin is kept simple, with flowing lines and a minimalist design that’s upmarket but not flashy. Generally, quality is pretty good, but some plastics low down in the cabin are a little cheap and the Model S is certainly not as plush as a Porsche Panamera. Quality isn’t of the same grade as the Panamera’s. Parts feel plasticky, such as the cup-holder and storage tray, but there’s leather, cool metal inserts and lots of tech that feels upmarket. There is some familiar Mercedes switchgear, too, especially the window controls and column-mounted gear selector, but this doesn’t detract from the futuristic appeal.

Kit is generous and includes heated seats, LED cabin lighting and a custom audio system with eleven speakers, although Tesla cheekily charges £200 for a boot load cover. Still, it's a pretty impressive place to be, and the only party piece the Model S is missing, is the Model X's gullwing doors.

The Model S’s interior is dominated by its 17-inch touchscreen. This controls all of the car’s functions, from media connectivity to navigation and personalised drive settings. It’s a focal point to the cabin with lots of tech – including Internet in the car – but requires a minimum 3G connection to run most functions. The main screen is intuitive to use and operates just like a tablet, with pressing, swiping and zooming functions.

The size of the screen means some of the settings are harder to reach, but the climate controls remain located at the bottom of the screen for easy access. Full length maps and WiFi connectivity are both boons, while the crystal clear reversing camera makes parking a doddle. Once on the move, all the crucial operations can be duplicated via the multifunction wheel, while speed, range and energy flow are displayed in the smart central TFT screen.