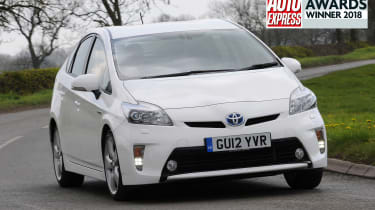 That there was a Mk3 Toyota Prius on sale with more than 230,000 miles at the time of writing shows the longevity of these ultra-efficient hybrid cars. Go for one with fewer miles and you’ll pay a bit more, but you’ll be safe in the knowledge that few models have proven themselves so reliable over the years. You’ll also be making huge fuel savings, especially if you drive in town a lot, which makes the proposition even sweeter.

The Prius is one to avoid if you’re after a hybrid that also offers a fun driving experience (a BMW i3 range-extender is a better bet for that), but it has everything else you’d want, including refinement, low running costs, a spacious interior and a comfortable ride. 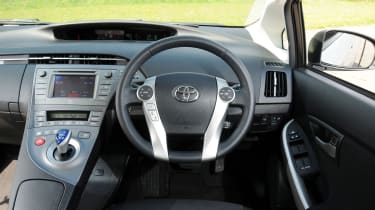 It’s no wonder you see so many used as taxis in towns and cities, where cabbies have flocked to the Prius for all of those reasons, plus its reliability. There are plenty on the market as a result, although if you buy one as a private driver expect a few people to try to flag you down for a lift every now and then. They’re popular with Uber drivers, and for good reason.

The 1.8-litre petrol engine is linked to an electric motor and drives the front wheels through a CVT auto box. The engine uses a special method of combustion called the Atkinson Cycle to achieve high fuel economy, and the battery that supplies the electric motor with power is charged using the petrol unit and the brakes as you drive around; there’s no need to plug in.

There’s no road tax to pay, because the Prius emits less than 100g/km of CO2, and you can expect upwards of 50mpg with careful driving. That’s a very cheap commute, and there’s enough space inside for a whole family as well. They’ll be relatively comfortable, too, because the ride is acceptable.

On the road: While it’s no driver’s car, the Prius is a refined and practical family car, plus it will be cheap to run.

Interior: Futuristic cabin styling matches the outside of the Toyota. There’s loads of room for all the family inside, too.

The Toyota Prius is the car that pretty much defined the hybrid sector, so it’s no surprise that it’s our pick here.

Put down £695 and on a three-year lease deal with BuyaCar.co.uk and you could pick up a used example for £200 per month.

That is for a previous-generation Prius, so the Toyota is not eligible for PCP finance. However, this deal still means it’s an affordable and economical hybrid car. 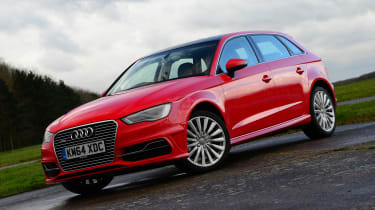 You can buy an Audi A3 e-tron from £12,000, which looks good value for an early example of plug-in hybrid technology. The A3 e-tron can be charged up at home, so there’s potential for big fuel savings if you don’t cover many miles. It’s also good to drive and the cabin is upmarket. 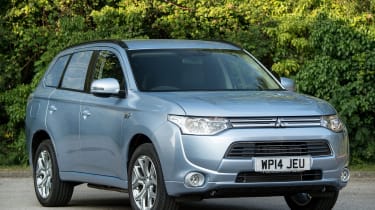 Another example of plug-in tech is Britain’s best-selling plug-in hybrid, the Mitsubishi Outlander PHEV. Its heavy weight means you need to be vigilant about plugging in to save fuel. It will interest lots of buyers due to its low running costs and practicality.