Volkswagen has given the new Golf a nip and tuck, and the GTI model gets a power boost as well - can it still compete with its rivals? 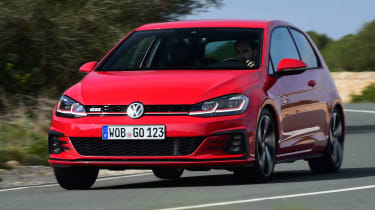 There are plenty of hotter hatches on the market, but the Volkswagen Golf GTI continues its march by offering usable, accessible performance in an economical, practical and hugely capable package. While it’s pricey, few models in this class offer such impressive quality. Rarely do you come across a car that does so much so well, but then VW has been doing this for 42 years – and it knows the GTI game better than anyone else.

Things move quickly when it comes to hot hatchbacks. When the original Volkswagen Golf GTI launched back in 1975 its 1.6-litre engine was churning out a modest 109bhp. Fast-forward 42 years and today’s updated seventh-generation GTI is producing more than double that, with 227bhp from a 2.0-litre turbo.

That’s a considerable increase over the original GTI and 10bhp more than the pre-facelift model this car replaces. In today’s market, however, the most powerful front-wheel-drive hot hatch (think SEAT Leon Cupra and Honda Civic Type R) is knocking on the door of 300bhp. But that's not what the GTI is about. The GTI has always been the middle ground – and a very capable one at that.

As before, an optional Performance Pack is available on the Golf GTI, adding a further 15bhp and a proper limited-slip front differential, but the model we’re driving here for the first time is the standard 227bhp version paired with a six-speed DSG gearbox. 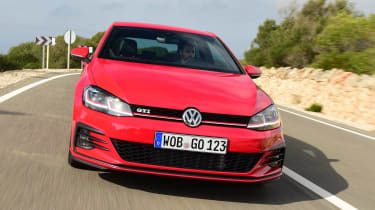 Before we get onto what its like, there are more other significant updates that are worth pointing out. Of course, there are the inevitable exterior styling tweaks – reshaped full-LED headlamps now feature, along with new front and rear bumpers – but it’s inside where big changes have occurred.

Housed in the dash is a new 9.2-inch Discovery Navigation Pro infotainment system which can be specced as an option. The system can be operated via gesture control – or so we’re told. For us, the hand signals are a gimmick and largely hopeless, the system leaving you frantically waving your hands in front of the screen like a conductor attempting to keep an orchestra of four-year-olds in sync.

The new infotainment setup also does away with buttons and is fully touchscreen, so you frustratingly no longer get the shortcut keys either side of the screen for ease of use. It does look incredibly slick but as an option priced at £1,325, it isn’t cheap. 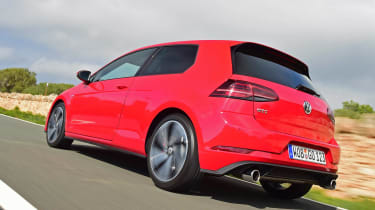 Elsewhere inside, the Volkswagen remains a comfortable, well-built and a pleasant place to spend time. Our test car didn’t come with the Golf GTI's trademark tartan sports seats but they definitely add that bit of sparkle to the overall design, as does the new configurable digital instrument cluster. Overall, it remains rather sensible and safe, but spend a day wrestling with a Honda Civic Type R’s infotainment system and seating position and you’ll be begging for the sanctuary that is VW’s take on the GTI theme.

On the move, things are much the same. Low speed refinement is excellent, control weights are light and the ride is more comparable to that of a Mercedes S-Class than a Civic Type R. Despite performance being the main agenda for the GTI, these things are almost as important because in the real-world the Golf is likely to spend more time plodding along a congested motorway than it is snaking its way down a sweeping country road.

Power delivery from the 2.0-litre turbo is smooth and far less frantic than you’ll find in the Golf's more potent rivals. A sub seven-second 0-62mph sprint is still quick, and in reality, more than you'll need on most occasions. If pub bragging rights are your thing, though, you'll be better off with the Civic. 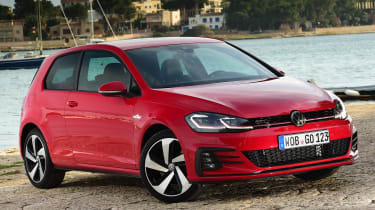 Approach a corner and what the GTI lacks in outright pace it makes up for in control, balance and poise. This standard version does without a proper limited slip front differential, but the XDS+ system does a respectable impression, mimicking the setup by nipping the front brakes on turn-in. Push too hard into a corner, however, and you can feel the front end begin to lose its grip on the tarmac.

Nevertheless, the GTI’s front end is alert and responds keenly to swift changes in direction, while body movement is kept in check if you lock the adaptive dampers into Sport mode. It’s a hugely rewarding car to drive fast and accurately, while the chassis lets you know exactly what the wheels at each end are up to. A lift of the throttle or hint of braking mid-corner gives subtle movements from the rear end, which you can feel through all the major controls.

The six-speed DSG gearbox is efficient, precise and quick with its changes up and down the ratios, but for maximum involvement it’s the manual gearbox you want – along with the £1,415 saving it brings. 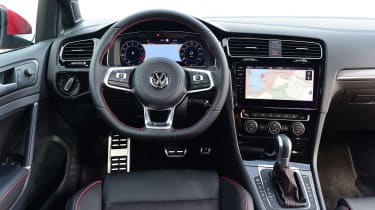 There is a slight niggle, though, and it comes from VW itself. As entertaining as the GTI is, we know for a fact that it can be better. Before VW launched this updated GTI, it also rolled out two other variants called the GTI Clubsport and Clubsport S – faster, lighter and more capable cars.

The reality is that you can no longer buy these versions from a VW dealership because they’re sold out, but the point remains that they are better and more exciting versions of the standard car – retaining the GTI's composure while upping the ante when it comes to performance.

If history is anything to go by, however, the optional Performance Package will take the GTI up a notch – but we’ll have to reserve judgment until we actually drive it.

On a practical level, strip away the GTI jewelry and you still have a spacious, comfortable and economical Golf hatchback. The 380-litre boot is wide and deep, while a bit of under floor storage is an added bonus.

A five-door model is infinitely more practical – and will be the bigger seller – but once you’ve squeezed in to the back of the three-door there is generous knee and headroom. Sitting three adults across the rear bench is doable, but you wouldn’t want to spend too long back there.