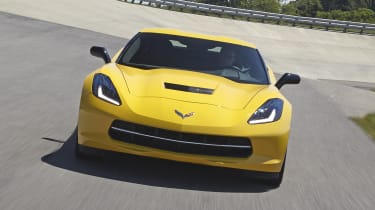 By simultaneously improving refinement, performance and agility, the new Stingray is a big step forward in the illustrious history of the Corvette. It’s a shame that there won’t be any right-hand drive cars for the UK, initially at least, but the there’s no denying the this is a full-blown supercar for sports car money. Subtle it isn’t, and it still can’t match European supercars for quality, but for those who want power and drama, it’s perfect.

The name might be a nod to the past, but the all-new Chevrolet Corvette Stingray is every inch a modern supercar. Its exterior, designed in Detroit, could have come from an Italian design house, while its interior is leaps and bounds ahead of its predecessor.

But the biggest change comes in the way the Corvette drives. While the American version will be offered an entry-level suspension setup, UK cars will feature a sports package called Z51 as standard. That adds a limited-slip differential, bigger wheels, tyres and brakes, and firmer suspension, while magnetic ride control adjustable dampers are optional. Electric power steering (just like the Porsche 911) delivers a more precise feel than before, but communication ultimately trails the Porsche.

However, at just 1,499 kg, the Corvette makes the most of its near-perfect 50/50 weight distribution on curvy roads, darting between corners with more agility than ever before. The Corvette’s 6.2-litre pushrod V8 might appear low-tech, but it features an aluminium block, direct injection and cylinder cut off on light throttle loads.

An optional sport exhaust fitted to our test car bumps power from 449bhp to 454bhp, but the biggest benefit is its NASCAR-style soundtrack. The Corvette’s seven-speed manual gearbox (another feature it shares with the Porsche 911) includes active rev-matching, much like the Nissan 370Z, which works well if you not adept with the heel-and-toe technique.

Less impressive is the optional six-speed automatic, which seemed over-eager to shift into a higher gear in our testing, leaving you out of the engine’s sweet spot. Few cars at any price can keep up with the Corvette in a drag race. Capable of sprinting to 62 mph in under four seconds and then coming to a halt in just 33 metres, the Corvette is ferocious in a straight line but also remarkably controlled in sharp hairpins.

Credit is due to both its grippy Michelin tires, which are actually narrower than the outgoing model in order to give the sports car a more nimble feel, as well as to a series of driver-selectable control modes accessed by a console-mounted dial. The five modes tailor everything from steering resistance and throttle sensitivity to ride quality (if you order the magnetic dampers) and even the way information is displayed on the TFT display in the instrument cluster.

The default Tour mode is comfortable for day-to-day use, while Sport and Track modes turn things up for more aggressive driving. Fuel-saving Eco and snow modes are also included. One glance at the vastly-improved interior and it’s obvious the Corvette has been repositioned as a more luxury-oriented model. Strictly a two-seater, its limited cargo space won’t make it a continent cruiser, but its perfectly capable on long motorway slogs.

Even in the US-only base configuration the new driver-focused dashboard uses much nicer materials, while optional full-leather trim dresses things up further. Two seats – a highly comfortable standard sport seat and a near competition-style track seat – are available, both covered in attractive perforated leather or synthetic suede. As before, coupes feature a removable roof panel that’s now formed from carbon fibre, although a full convertible will follow next year.