The 1988 Tourist Trophy at Silverstone saw the fastest Ford touring cars from the UK, Europe and Australia go head to head to find the quickest Sierra Cosworth of them all 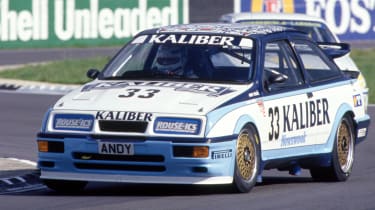 Touring car racing has constantly evolved over the years. Today’s hatchback-based tin-tops can trace their ancestry to the super-tourers of the nineties. But before then, the era of Group A ruled the roost.

Group A was introduced by the FIA in 1982, and soon became the category of choice for car makers that could relate to the phrase ‘Win on Sunday, sell on Monday’. The likes of BMW, Jaguar, Ford, Volvo, Rover, Alfa Romeo, Toyota and many more took part, while the category’s multi-division format ensured a broad variety of cars hit the grid.

Group A’s popularity meant it earned World Championship status in 1987, but this would also be its undoing. Seeing its success as a threat to Formula One, the FIA, with a little persuasion from F1 ringleader Bernie Ecclestone, saw fit to downgrade Group A back to a European series in 1988.

By then, the fastest touring car of all was the Ford Sierra RS500 Cosworth. The RS500 was an evolution of the standard Cosworth designed to be unbeatable in touring cars. The roadgoing version had a stronger engine, a bigger turbo and extra kit that wasn’t even plumbed in; it was there exclusively for the racing cars to exploit.

In Europe, the works Sierras were run by the Swiss Eggenberger outfit, led by Brit Steve Soper, while in the UK Andy Rouse had the fastest Cossie in the BTCC. In Australia, touring car legend Dick Johnson led the way; the Sierra was so dominant in Oz that diehard Holden racer Peter Brock even swapped brands – tantamount to a football fan switching allegiance from Man City to United.

With so many fast Fords across the globe, the question was: which was the fastest of them all? That was answered at Silverstone on 4 September, 1988. The RAC Tourist Trophy is the world’s oldest continuous motor race, dating back to 1905, and for 1988 it was round nine of the ETCC. The three-hour enduro saw the series regulars joined by a gaggle of BTCC entrants and one wildcard: Aussie Johnson had travelled halfway around the world to prove a point against the locals. 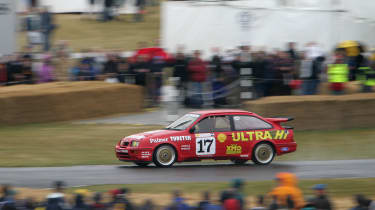 And prove it he did. He qualified his red RS500 on pole, four tenths of a second ahead of Soper – a huge gap, considering the flat-out nature of Silverstone’s layout in 1988. Meanwhile, Rouse led the BTCC armada in fourth, half a second behind pole.

Johnson maintained his dominance in the race, setting a fastest lap that would’ve put the car sixth on the grid, and pulled a big gap over his rivals. But while he was fast, problems set in for the Aussie late in the race, with overheating and then a failed water pump curtailing his bid with half an hour remaining.

So it was left to Rouse to take on the Eggenberger team. While the Texaco-backed cars had the speed, Kaliber-sponsored Rouse was more consistent and finished ahead, boosting the profile of the BTCC in the process.

Ford celebrated, but Rouse’s victory was bittersweet; he’d denied Soper points, and Group A’s class format meant that BMW, running in Division 2 with the M3, now had one hand on the ETCC title. In the end, BMW’s Roberto Ravaglia won it from Soper by seven points, a result that could have been reversed if the fast Ford battle hadn’t happened. Still, we’re very glad that it did.

What's your favourite BTCC racecar? Let us know in the comments below...