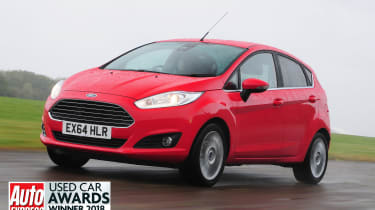 The Ford Fiesta has been Britain’s best-selling car for more than a decade, so it’s no surprise that this Mk6 version is one of the best used buys around.

Given that more than 100,000 have been registered every year for the past decade, there’s so much choice that we’d advise holding out for your ideal spec. That should be a five-door Zetec model, because this offers the most practicality without sacrificing the Fiesta’s sporty handling. There’s a decent level of kit, too. 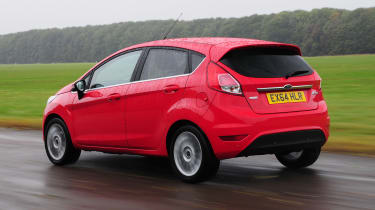 Having been on sale for almost 10 years, the Mk6 Fiesta is a thoroughly developed car. There’s a choice of frugal diesels, but given the way future legislation could penalise these models, we’d go for the downsized turbocharged petrols, because there’s maturity beyond the budget here.

Ford’s 1.0-litre three-cylinder turbocharged EcoBoost petrol is the engine to go for. This arrived after an update in 2013, and with 99bhp there’s enough punch without sacrificing economy; it’s the pick of the bunch.

Even compared with the current Mk7 Fiesta, this used model’s steering and suspension serve up lots of fun, but the car also provides a refined ride. It’s relatively grown-up so it’s easy to live with, and at this price that’s a big benefit. There are more spacious superminis, such as the Skoda Fabia, but none offers the Ford’s level of ability for similar money. 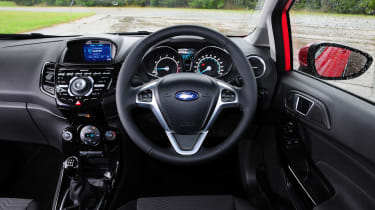 A facelifted 2015 Zetec car with the EcoBoost unit can be picked up for a reasonable £6,500. With only 35,000 miles on the clock, it shouldn’t show too many signs of wear, either. You can also capitalise on Ford’s 781-strong UK dealer network and affordable servicing. Factor in strong economy and low emissions, and the Fiesta will be cost-effective to keep on the road.

On the road: Fiesta combines a fun, sporty drive with decent refinement in a range that caters for all buyers’ tastes.

Interior: Five-door models are the most practical, but all versions provide reasonable space and feel solidly built.

For not much more a month than you’d pay for a Skoda Citigo via our sister site, BuyaCar.co.uk, you could have a nearly new example of Britain’s best-selling car: the Ford Fiesta. It’ll set you back £124 a month. That’s with a £650 deposit, so not too steep. You’ll pay a total of £5,114 over a three-year contract, which is still affordable, even though you won’t own it outright. 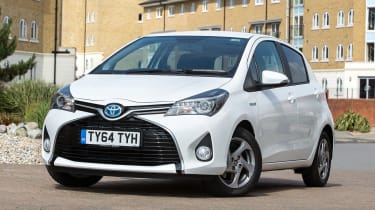 With alternative-fuel vehicles becoming more popular, you might think you’d have to buy a large, premium new model to get this tech. You’d be wrong. Toyota’s Yaris Hybrid offers petrol-electric propulsion and incredibly affordable running costs as a result from just £6,300. 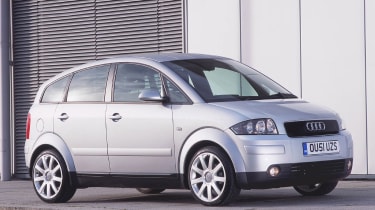 The Audi A2 was a revolutionary small car. It used aluminium to keep weight down and is becoming a cult classic, so now’s the time to buy. Solid Audi build quality means even high-mileage cars should be acceptable. Avoid the noisy diesel and opt for petrol.