A cooling system check gives reliability and peace of mind. Alisdair Cusick and Ed Evans explain how and why. 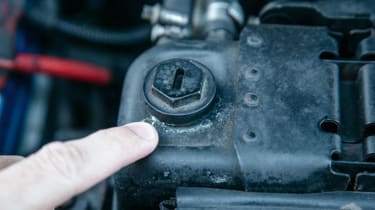 In the process of burning fuel, the internal combustion engine develops heat as a by-product of the cycle. All engines, be it petrol or diesel, need a way to dispose of that heat, otherwise the moving internal parts would simply overheat and eventually jam or weld themselves together. There are two main ways of cooling an engine: air or water.

Air cooled engines usually work by air blowing over cooling fins on the cylinder heads as seen on motorbike and early Porsche engines. Water-cooling, used on Land Rovers, relies on water circulated through passages inside the engine by a coolant pump, and delivered to the radiator where it is cooled by air flowing through the matrix (assisted by the engine fan).

Once cooled, the water flows from the radiator back into the engine to remove more heat. To help warm up the engine faster from cold, and thus use less fuel, a thermostat reduces the flow of coolant to the radiator until the most efficient temperature is reached. Then the thermostat opens, allowing full flow around the system. Simple, but effective.

The coolant operates typically between 90 and 110 degrees C. It doesn’t boil because the coolant system is sealed via a screw cap on the coolant header tank, so the pressure increases when it is hot, which increases the boiling point. Thus, a slight leak allowing the system to lose pressure, will result in the coolant boiling. Also, antifreeze additive raises the boiling point, lowers the freezing point and prevents corrosion inside the system. To achieve that efficiently, the antifreeze needs to be mixed with water in the ratio specified for your model.

Antifreeze finds any sort of gap, so under working pressure it will leak from hoses that aren’t tight, worn water pump seals, aged gaskets, or corroded radiators. Leaks mean a slowly lowering level in the system, which eventually depletes the cooling ability. To maintain effectiveness, the fluid also needs draining and refreshing to the correct dilution at regular intervals of usually two or five years, or even 10 on later models, depending on the type of coolant used and the model specification.

But it’s a quick, easy job to check over the system, spot problems before they get to the point of causing a failure, and even to drain and refill the coolant. We’re looking at a late Range Rover Classic here, but the basic principles are the same whether you have a Series vehicle, or a modern Land Rover. Always allow the engine to cool and the coolant to depressurise before working on any part of the coolant system.

Leaks from the heater matrix which is usually hidden behind the dashboard on all but Series and Defender models can be difficult to identify. Leakage from the matrix can be caused by overheat, mechanical damage from vibration and internal corrosion if antifreeze servicing has been neglected.

Irritatingly, it is usually a big job to sort on anything other than a Series or Defender. When a vehicle is assembled, the heater matrix is usually one of the first components to go on the bare shell. To replace one, means you may have to strip out the dashboard or facia.

If you’re losing coolant and can’t trace a leak elsewhere on the system, check the carpets behind and under the dash. A heater matrix leak usually shows as a stain to the carpet, or slippery/sticky moisture – not to be confused with a leak from the air conditioning moisture drain, which will be clean water. 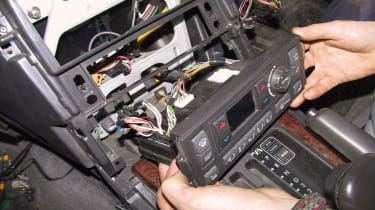 Thermostats RARELY give trouble, but you’ll know if one fails because the engine will take an unusually long time to warm up, if indeed it warms up at all. Thermostats are designed to fail in the open state, so that, rather than restricting the coolant flow during the warm up period, they allow full flow of the coolant.

Check your thermostat by feeling the top hose downstream from the thermostat itself. The hose should stay cold as the system warms, then get hot as the thermostat opens, usually around 80 degrees or so. Keep fingers well clear of the cooling fan and drive belt.

There are two types of antifreeze: silicate-based Ethylene Glycol (EG), used typically until 1999, and Silicate-free Organic Acid Technology (OAT), which has been widely used since then. Most Ethylene Glycol types need changing twice yearly. The OAT type is serviceable for five or 10 years. It’s essential to follow the recommendations in your vehicle handbook regarding the type of antifreeze needed, and the renewal frequency.

OAT is red in colour, and Ethylene Glycol can be blue, green or yellow. You can mix different colours of Ethylene Glycol, but you must never mix OAT and Ethylene Glycol, as it can react and form a jelly which can block coolant passages. Antifreeze has service intervals because it loses its corrosion protection over time, due to engine heat and the mechanical action of the pump.

For vehicles in long term storage, so long as they have a good mix of antifreeze, the frost protection of the engine is maintained. Correct servicing is always key, but it’s good to know the engine shouldn’t crack over a winter. 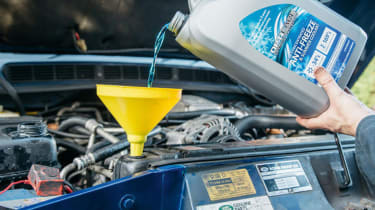 • If the coolant system needs to be inspected while hot, avoid squeezing or moving hoses, and wear eye protection and gloves • Escaping hot coolant will soak through gloves and scald the skin, so pull gloves off quickly when wetted • Never open the coolant filler cap when the system is hot and, even when cold, beware of residual pressure• Always switch the engine off before inspecting the system, and beware of electric fans starting up independently