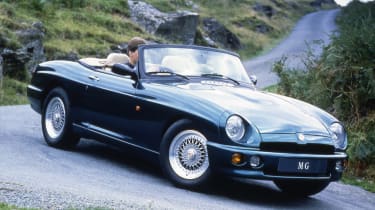 The RV8 came about thanks to Rover’s Heritage division, which had recently started to remanufacture MGB bodyshells. MG needed to get a roadster to market in a hurry, and reworking its classic model gave it an easy solution.

Despite (or maybe because of) the RV8 being based on a 30-year old model, its classic status was assured from the day it was unveiled, and with a mere 1982 built between 1992 and 1995, the cars are now sought after – and they’re also more unusual than you might think.

Many dismiss the RV8 as little more than a B in a party frock, but the metamorphosis involved replacing 95 per cent of the body panels to give a much more muscular look. The 3.9-litre V8 was also a massive improvement over the B-Series of the MGB, and to improve handling there was a wider track (covered by flared wheelarches) and upgraded suspension.

The interior was streets ahead with its standard wooden dashboard and leather seats, and while it may have looked olde worlde, it was perfectly in keeping with the MG’s role as quintessential British sportscar.

However, while all of these updates were welcome, the RV8 still drives like a 1960s car. So don’t assume the RV8 is like a modern sportscar; it’s a brilliant cruiser thanks to that torquey V8 but it’ll never give Elise owners anything to worry about.

Which MG RV8 to buy?

Although 1583 RV8s went to Japan, many of those examples have now come back to the UK, joining the 307 originally sold here. No RV8s were ever sold in the US, and with all examples featuring right-hand drive there’s usually a reasonable number of examples to choose from.

With all RV8s featuring the same basic spec (V8 power, five-speed manual gearbox) and just a handful of colours, on paper there’s little to separate one RV8 from another. However, while  RV8s aren’t all that numerous, you can still be choosy.

Of the cars available at any one time, few will have covered a particularly high mileage and most will have been cherished. Cars originally sold in the UK, plus those finished in Nightfire Red or Oxford Blue, carry a premium of up to 10 per cent over a Woodcote Green car; the latter is by far the most common colour.

• Corrosion: the bodywork corrodes only if it’s been pranged then poorly repaired. Bodyshells were electrophoretically dipped after the metal had been zinc-coated. The one exception is the steel windscreen surround, so look for deformed rubbers – a sign of corrosion underneath. Sometimes repairs are possible; if not, you’ll need a new surround. Steel or glassfibre items are available and while fitting them is involved, it is a DIY proposition.

• Engine: the 3.9-litre Rover V8 lasts 300,000 miles if looked after but wears much faster if neglected and/or thrashed. Low mileage cars aren’t always the best bet, as regular short trips often causes premature camshaft wear. If not serviced correctly, problems can occur after just 30,000 miles. A slight tapping sound from the top end of the engine is the givaway. Annual oil changes are the key, using a decent semi-synthetic 10W/40 lubricant. Fully synthetic is too thin.

• Exhaust manifold: blown exhaust manifold gaskets aren’t rare, so lift the bonnet and listen for blowing from the manifolds. Any one of the four individual gaskets could have blown, and it’s usually best to change them all at the same time.

• Exhaust: the stainless steel exhaust corrodes, while the tubular exhaust manifolds can fracture from the twisting of the block on its mountings. Sometimes the cracks can be welded up in situ – but not always.

• Coolant: the correct anti-freeze must be used, kept up to strength and changed regularly. It’s wise to leave the car idling for a while to check the operation of the cooling system. If it has been neglected, the car’s radiator has probably become blocked due to internal corrosion. Also check the fins at the bottom of the radiator; they can rot, leading to leaks.

• Transmission: a five speed manual transmission was the only option when new, although the orignal LT77 Land Rover ‘box (reverse next to fifth) was substituted early on for the later R380 unit (reverse below fifth). The older gearbox is slightly more agricultural, but is longer-lived and cheaper to rebuild.

• Differential: the rear axle can trace its roots back to the Leyland Sherpa van, ans it’s important to listen for any whining sounds. The unit incorperated a Quaife limited slip differential, whihch make a rebuild very expensive.

• Shocks: adjustable Koni dampers were fitted as standard, and adjusting them to the stiffest setting improves the handling.

• Wheels: the originals wheels were unique 15-inch items, so if you want an original-looking car then ensure they are in good condition. Similar-looking 17-inch units are available if you want a better selection of tyres.

• Woodwork: the interior woodwork can suffer from delaminated veneer. It may be preferable to restore than replace as it will be hard to match the wood, although restoration can also lead to a colour mismatch. Either way it’s best to speak to a specialist

• Leather: the leather seats become tired quite quickly, and the cream leather – fitted to all RV8s – looks bad when it is not kept clean.

• Roof: to avoid an unwanted bill, ensure that the hood is in decent shape, as replacements are costly. Although fundamentally the same as the MGB hood, it’s still a big job to do.

1992: RV8 introduced, based on MGB bodyshell but with extensive mechanical and bodywork revisions. Power comes from a 3.9-litre Rover V8 with all cars getting a five-speed manual gearbox.

The MG RV8 is a highly desirable machine, and values have always remained strong due to the limited production run. Finding a car in great condition is not a struggle, and you can pick up something very presentable from around £13,000-£16,500.

The very best examples, with the most desirable trim options, might just push £20,000. At the other end of the spectrum, a rough and ready RV8 could possibly be secured for just £7500.