Everything you need to know before buying Peugeot's legendary hot hatch. 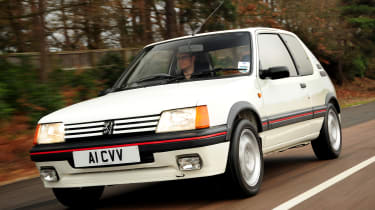 The last five years have been an interesting time for the Peugeot 205 GTI, and it's genuinely difficult to recall a fairly ordinary car going through such a rapid market shift quite so quickly. While the headline figures achieved at auction for exceptional examples have grown to upwards of £30,000 – with £38k the current UK record – it is the more average (and numerous) cars that have really felt the effect. Not only have prices all risen significantly, but there is now far more of an appetite for original and unmolested examples.

In terms of 1980s hot hatchbacks, the 205 has always been seen as the best. It might not have been the quickest, or even the best handling, but there was something fundamentally right about this small Peugeot as a complete package. Even after production stopped in 1993, its popularity never really subsided. It went through a phase of being a cheap track toy for many, and a lot were modified beyond all recognition, but a good number survived to this point.

Which is a good thing, because today's buyer desires originality, as well as great condition. Most are willing to pay strong money for the best they can find too. Not only has this pushed up the prices of those genuinely special cars, but has driven many to rebuild and restore more tired examples.

The £500 ruins, bodged or abandoned track-car projects, and the terminally tired, seem to have vanished. The Peugeot 205 GTI has broken out of bangerdom for good, and even the saddest case is now a ‘great base for an appreciating classic’.

There are various flavours of 205 GTI but lightness, zingy engine, whipcrack gearchange, razor-sharp steering (1.9 especially) and a super-precise throttle/cornering balance are common to all.

The 1984 original was a 105bhp 1.6, raised to 115bhp shortly before the longer-stroke 1.9 arrived at the end of 1986. This had taller gearing, effortless torque, disc brakes all round and yet crisper dynamics thanks to lower-profile tyres and revised offsets for the bigger wheels with fewer, larger holes. The engines weigh practically the same yet there’s no doubt that the 1.9 is an edgier drive, but it’s also a bigger thrill, and prices reflect that. 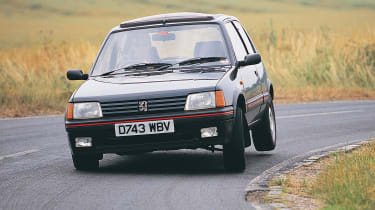 Other variables? Later cars could be had with power steering, with a quicker rack but some masking of the intense grip/slip dialogue. In late 1987 came a facelift with a less rattle-prone, more plasticky dashboard and less painted metal in the cabin, but the purity of the original Paul Bracq-designed interior was lost.

None of this matters much. Any 205 GTI will light up your life; no hot hatchback has ever been more beguiling to drive.

The good news is that the 205 GTI enjoys a pretty high survival rate, meaning that there is actually a great selection of cars available at any one time. Post-1990 Phase 2 cars (black interior and exterior trim, and smoked rear lights) are generally the most desirable, and the easiest to find in top condition. Post-1993 models were fitted with a catalytic converter, which slightly blunted performance.

The considerably rarer Phase 1s are rapidly becoming more collectable, but are on the whole worth slightly less with the exception of absolutely original and low-mileage examples. Offering the greatest value are the most common ’87-90 Phase 1.5 cars. Most GTIs are fitted with a factory sunroof, meaning that non-sunroof cars do carry a premium.

It’s also worth considering one of the many different special editions. The highly desirable Phase 1.5 Sorrento Green and Miami Blue GTIs from 1989 came with a full leather interior and power steering. More common Phase 2s are available in these colours too, but they’re less well-specified and hence not as desirable.

A total of 25 1FM special editions were built to celebrate the 25th anniversary of BBC Radio 1, and are today one of the most desirable special editions. Finished in black, the 1FM features a unique Clarion stereo system, leather interior and a very high specification. A number still survive, and there is a register dedicated to keeping track of the remaining cars.

Although modified 205s are less popular than they once were, tuned examples remain common, and shouldn’t always be dismissed. There are cars from the likes of Gutmann and Turbo Technics, who modified them in period, which can command huge prices today due to their rarity. Home-made 16v conversions were the lifeblood of the 205 scene for many years, making use of the fantastic 405 Mi16 engine, as well as the later 306 GTI6 unit. Generally speaking, it’s advisable to give converted cars a wide berth, unless the work has been carried out by a reputable specialist, or you know exactly what you are looking for. They are exceptionally good fun though!

Although we’re not covering them in detail here, there are also other performance variants of the 205 that are well worth seeking out. The 205 XS uses the 1360cc 85bhp TU engine, and is a whole lot lighter than the GTI, offering a surprising amount of fun. The later UK-market Rallye was also similar in concept to this model, although fitted with a lower-powered 75bhp engine. These are no longer the bargain they once were though. 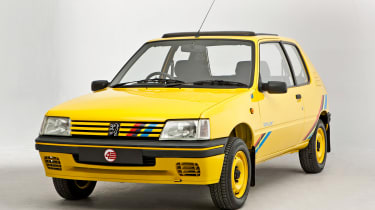 It’s the left-hand drive European-market Rallye (fitted with wider arch spats and white steel wheels) that is even more coveted than the GTI. This stripped-out hardcore road car was originally built to be eligible for under 1300cc rallying. Featuring a 1294cc version of the smaller 1.1-litre TU engine, the addition of twin Weber carbs pushed power to just over 100bhp, which endowed the 790kg 205 surprising performance.

While the finely-honed chassis of the GTI is somewhat compromised by cutting the roof off, the convertible CTI model is still a very cool way to enjoy some open-air classic motoring. Initially only offered in 1.6-litre form, the very last models got a detuned catalysed 1.9-litre engine.

Although no automatic GTI was ever produced (other than a handful of special order vehicles) there was a limited run of 1.9-litre automatic Gentry models, offered with a high spec. Although featuring the GTI’s body styling, this was more of a luxury-orientated car, lacking the sports suspension of the GTI. 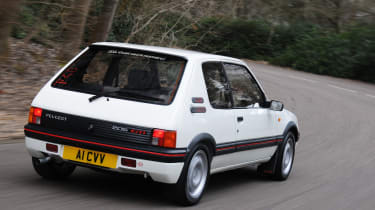 • Contrary to popular opinion, the 205 is not a badly made car. True, some of the interior plastics feel a little flimsy (especially on early cars), the body panels are paper-thin and cars can often look tired, but it’s generally well engineered. A well-maintained 205 will rarely cause headaches. Here is what you need to look out for.

• Take a look at the interior and, and the first thing that you’ll probably notice is some wear to the side bolsters on the driver's seat. This is by far the most common interior foible of any GTI. Seats can be repaired, more easily on the 1.9s with part-leather interiors. If the fabric has worn, new covers are now being reproduced.

• The interior plastics on later cars is generally hard wearing and still looks good today if in good condition, however the earliest phase 1 models wear less well. If all the parts are in good condition, then look after it as secondhand replacement parts are tricky to find.

• The all-aluminium XU engines are strong, but high-mileage or thrashed examples might show blue smoke on start-up and on overrun. In most cases that’s just worn valve stem seals.

• Finding one with a slightly tired gearbox is not uncommon, but the main thing to watch for is worn-out synchromesh on third and fourth gears. If the change feels sloppy, it will likely need new linkages. New or uprated linkages are not expensive and are actually easy to fit.

• Any GTI should have had – or will need – a full engine/transmission restoration by now. Most 205s will have been driven hard, so budget around £1000 to renew all the basics.

• If the rear end of the car is creaking, it probably needs a rear suspension rebuild. There’s no science to knowing when it will need a rebuild. If a 205 is driven for long periods with damaged rear axle bearings, the beam will seize, which puts strain on the bodyshell. The entire beam will probably need to be replaced with a reconditioned unit if this is the case.

• Pay up to £350 to renew the bearings, and £800 for a replacement and fully rebuilt beam. Genuine or high quality component are more expensive, however will give trouble-free motoring for many years, unlike using cheaper rebuild kits which have been known to cause problems.

• You will struggle to find any 205 that hasn’t had some new paintwork. The original finish was never brilliant and many have faded, with lacquer peel commonplace. Many cars will have had a full respray, so ensure this was done to a high standard, with photographic evidence of any rust removal.

• Corrosion was much less of a problem than in many contemporary rivals, but the rot is really beginning to set in today. Check the boot floor and suspension mounts, front inner wings, and the seam between the bulkhead and floorpan – which is easier said than done. The original factory underseal can hide a multitude of sins too, so be careful.

• Another common area for corrosion is behind the fuel tank, as well as the rigid brake lines in the same area. It’s amazing the state that you find these in; usually they’re the original pipes. They won’t be picked up on an MoT.

February 1985: Minor spec changes to the GTI, including softer suspension after complaints of an overly hard ride on early cars.

April 1986: Power increased to 115bhp with an uprated cylinder head and camshaft.

August 1989: Another minor update, with new BE3 gearbox, slightly larger two-piece exhaust, and power steering made available as an option.

• www.peugeotcentral.co.uk – Peugeot forum for all models

Whether you’re after a usable everyday classic, or something to cherish for years to come, there is a 205 GTI out there for you. Top condition cars are starting to fetch serious money and these headline figures have also helped to push values of more ordinary cars upwards. Be patient and do your research to find the the right car for the right money.

Given regular servicing and proper mechanical maintenance, these cars are extremely reliable and a joy to drive. There are various different clubs, a healthy number of specialists and reasonable parts availability, so with interest in 1980s classics surging, now really is a great time to buy and own a 205 GTI.

Gone are the days of finding a usable car for £500 though. Tatty projects start from around £1000 now, with usable examples likely to cost at least £2500. £6500-£10,000 would get you into one of the best 1.9s out there. The 1.6-litre cars were valued slightly less in the past, however condition, history and mileage are the biggest decider of values today.