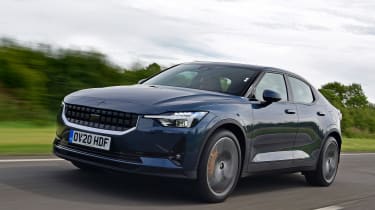 The Polestar 2 is a polished first attempt at an all-electric car - managing to deliver quality, style and a decent drive. The manufacturer’s close relationship with Volvo is clear, because the Polestar 2’s chunky design is offset with cool, Scandinavian touches.

For those seeking something different to a Tesla Model 3, the Polestar 2 has most bases covered, with good range, great on-board tech and reassuring levels of safety kit. The family hatchback certainly stands out from the crowd with its classy good looks, and it’s competitively priced - definitely one to consider.

You could be forgiven for not having heard of Polestar. The Swedish manufacturer started life as the banner for Volvo’s motorsport activity (mainly in Swedish touring cars), then became the performance badge for Volvo cars. Now it has fully graduated to being a standalone car maker itself, albeit still under ownership of Volvo and Chinese giant Geely.

Polestar’s first foray into full vehicle production was in 2017 with the aptly named Polestar 1 - a low-volume, plug-in hybrid coupe. The fastback-styled Polestar 2 is an altogether more accessible car, and the company is aiming to take on Tesla’s Model 3 and steal key sales from its US rival. 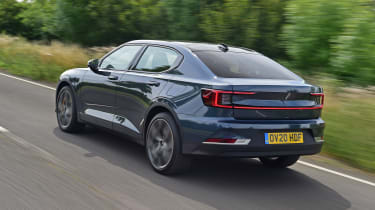 The Polestar 2 sits on Volvo’s Compact Modular Architecture (CMA) platform, which is also used for the Volvo XC40. The Polestar 2 has a saloon-look bodystyle, but is actually a five-door hatchback with a slightly elevated ride height. This gives it a unique shape that’s not quite a crossover, but still offers decent family practicality.

Polestar has fitted a 78kWh battery, which sends power to two electric motors - one located at each axle for four-wheel drive. The system produces a healthy total of 402bhp and 660Nm of torque, and it delivers the familiar instant acceleration of electric drive.

Priced from around £47,000 (including the Government’s £3,000 plug-in car grant), Polestar is clearly taking direct aim at the Tesla Model 3. But such is its capability that it will no doubt be under consideration from customers looking at the latest premium EVs from BMW, Mercedes, Jaguar, Audi and Volkswagen.

In keeping with its unique sense of style, Polestar has done away with traditional trim levels and instead offers just the additional Performance pack to the already generous level of standard equipment. The extra kit is primarily focused on improving the driving characteristics of the car and includes Brembo brakes, Ohlins dampers and 20-inch forged alloy wheels, along with gold-coloured seat belts to match the colour of the brake calipers.

Polestar has also declared itself ‘vegan-friendly’, with the 2’s interior upholstery made from a 100% vegan material known as WeaveTech. However, slightly strangely you can still specify leather trim - for an extra £4,000.