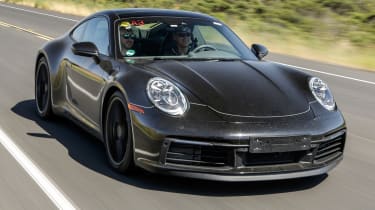 Porsche has had to update its iconic 911 within ever tightening regulations, but it looks to have achieved this while retaining all the sporting character and usability that’s a 911 hallmark. We’ll find out for sure shortly, but our first impressions show huge promise, while the addition of a hybrid model is intriguing

In just a few weeks Porsche will pull the covers off its new 992-series 911, but we’ve been riding along as the development cars are signed off. Every new 911 is significant, but this one takes the rear-engined icon into the future, with new technology, revised drivetrain and driver aids, all the while retaining its signature driver appeal and usability.

The shape is obviously familiar, Porsche knowing better than to mess with its lines too much, but more of that shapely body will be constructed from aluminium in a bid to maintain the same weight as the outgoing car. That’s significant, because there have been a number of necessary changes to the engine, with European cars requiring exhaust filters which add weight to the rear. Ever-tougher fuel consumption and emissions regulations necessitate this, Porsche adding an all new intake system, new Piezo fuel injection and revised intercooling to the 911’s 3.0-litre turbocharged flat-six engine.

The new 911 will be introduced in Carrera S coupe form at November’s LA Motor Show, with Porsche’s PDK twin-clutch automatic transmission. Significantly, the PDK transmission now has eight gears, this leaving some space in the gearbox casing for an electric motor. That gap will remain empty for now, August Achleitner, Vice President Product Line 911, saying: “The whole car in its layout, its structure, is prepared for any hybrid solution in the future. We do not do it right now, we will not introduce it in the next years, because we are not yet satisfied with the performance, especially of the batteries.” 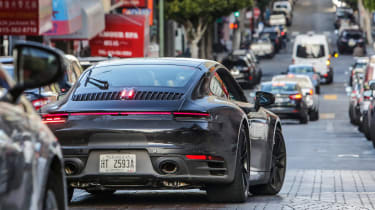 In Carrera S form the 3.0-litre turbocharged flat-six will produce the same 450bhp as the outgoing GTS model, with torque of around 530Nm. That’ll be enough to allow it to reach 0-62mph in around four seconds, and move on to a top speed in excess of 190mph. The manual transmission, carried over in seven-speed form will join the PDK offering early next year, as will the standard Carrera - this anticipated to have around 385hp.

In the Carrera S we’re riding in the interior is still largely covered but retains the large central rev-counter, that's now surrounded by a pair of configurable screens. The dash itself is now stepped, the centre gaining a touchscreen that’ll be familiar to Cayenne drivers. The cabin retains the 911’s signature usefulness, while refinement, especially relating to tyre noise from the front has been significantly improved, that's clear on the rough US highway surfaces.

With Achleitner driving on everything from city streets to mountain roads, it’s clear the 992 hasn’t lost any of the 911's agility or pace; the engine’s response appears even keener than that of the outgoing car, while the suspension rides with real control without harshness on more challenging surfaces. We’ll confirm how good the steering feel is when we drive it early next year, but the engineers are promising it’ll better that of the 991 before it.

The cabriolet will also join the line-up in 2019, while Porsche will introduce Turbo, Turbo S and GT3/RS models in the next 12-18 months.

Filling the Carrera S’s arches are staggered wheel sizes, these featuring for the first time on non-GT models. In the S that means a 20-inch front wheel and a 21-inch rear wheel, which combined with a 40mm wide front track, improves stability and handing. 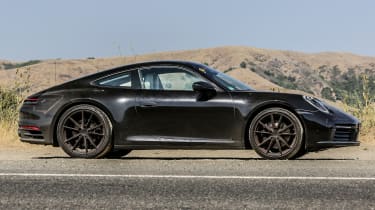 Also aiding stability in the wet is standard fitment of a new Wet mode to the familiar Normal, Sport, Sport+ and Individual driving choices. This safety system operates automatically, detecting wet surfaces via acoustic sensors in the front wheel arches and adjusting the stability, gearbox and angle of the rear wing accordingly. The driver is then able to select a further Wet mode setting should they want to maximise stability in poor conditions.

It’s just one of a number of new driver aids being added to the 911, with the car also gaining the option of Lane Keeping Assist, Lane Departure Warning and Night Vision. Convenience in all cars will be aided by keyless go, the door handles of the 992 popping out when you approach it.