The Porsche 911 Targa GTS is the ultimate version of the open-top sports car. Yes, it's very expensive - but for a little over £7,000 more than the S model the extra kit, power boost and handling improvements are worthwhile. The sports exhaust and Sport Chrono Package will be must have options for many buyers anyway, and the styling additions only serve to make the 911 Targa even more beautiful.

Porsche has given the 911 Targa 4 the GTS treatment, and Auto Express was given an exclusive test drive of the new model on the road race circuit that gave the car its name.

Started in 1906, the Targa Florio originally a 148km route through the Sicilian countryside, and with more than 2,000 curves to navigate it was the perfect location to test the Porsche 911 Targa GTS's updated chassis and engine.

As with other GTS models, Porsche Active Suspension Management is standard and the springs are lowered by 10mm. There are also changes to the 3.8-litre flat six engine's cylinder head and intake and exhaust manifolds, which boosts power by 30bhp to 424bhp. This extra performance is all at the top end, and only reduces the 0-62mph time by 0.1 seconds to 4.7 seconds. In all honesty you’d need a back-to-back test with a normal S model to notice it, and even then the difference in straight-line speed would be marginal. 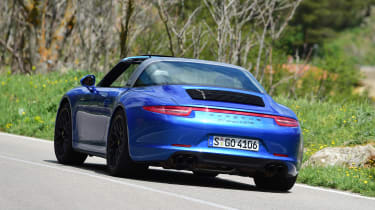 However, the GTS upgrade also includes the Sport Chrono Package as standard. This adds a stopwatch on the dash, a more aggressive throttle map and a Sports Plus mode which gives a more playful setting to the Porsche Stability Management allowing for more slip before the electronics intervene. In the case of automatic models it also includes a launch control funtion, enabling the Targa GTS to get from 0-62mph in just 4.3 seconds.

With manual models like out test car, however, it automatically blips the throttle on downshifts (for those who can't be bothered to heal and toe), but we found that this reduced the feeling of involvement, which is the whole point of having the manual in the first place.

On the switchback roads of the Targa Florio, a race which Porsche won 11 times, stirring the gears is a lot of fun - helped by the fact that Porsche has improved the action of the seven-speed manual. But while it is a pleasant to use, the final ratio does seem like a cog too many, sometimes leaving you confused as to which gear you're in. 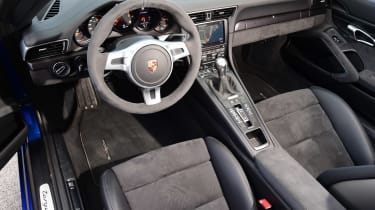 All Targa models come with all-wheel-drive as standard and this lets you get on the power sooner when exiting hairpins - which proved useful on this twisty road route. On the flip side, having power sent through the front wheels does dilute the steering feel over rear-drive models. The active engine mounts, another GTS benefit, came into their own more than they would on a normal drive in the UK, too, by preventing that mass at the back moving about so much under lateral loads.

In fact, the course we drove was so technical that right until the last event was held in 1977 the maximum average speed during the Targa Floria never topped 80mph. We never got near that, but the Targa GTS still proved a lot of fun - especially with the bark from Porsche Sports Exhaust, standard on the GTS, reverberating off the mountainside.

The Targa is the least focused off all the 911s. It's the heaviest model - about 85kg over the similar Coupe 4 GTS - and has slightly softer suspension settings too. Though on the battered roads of the Targa Florio, which were in a particularly poor state of repair following recent landslides, it was amazing how comfy even the more focused GTS model felt. We have little doubt it will be easy to live with in the UK. 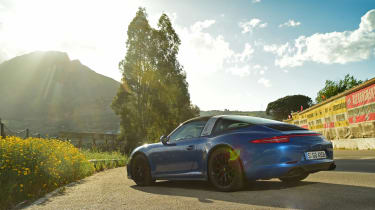