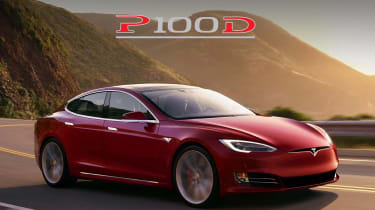 A fresh Tesla Easter egg has landed for owners of P100D models, hidden in the company's latest over the air firmware update.

As promised towards the end of 2016, owners of Tesla vehicles fitted with the firm’s most potent battery pack can now enable a Ludicrous+ mode on top of the standard Ludicrous speed boost.

The Easter egg boosts power, and as promised slashes the Model S P100D’s 0-60mph time by a tenth of a second, resulting in a mad dash of just 2.4 seconds – placing the saloon in the same ballpark as hypercars like the LaFerrari, McLaren P1 and Porsche 918 Spyder.

It also means Tesla’s fastest vehicle is almost on par with the new Faraday Future FF91. The new electric SUV was the star of the Consumer Electronics Show, packing a 1000bhp plus all-electric drivetrain for a 0-62mph time of 2.39 seconds.

• "Tesla now makes the world's fastest car - if not the prettiest"

To unlock the extra power – some 33bhp - Model S and X P100D owners need to have the latest firmware (version 2.52.22). Pressing and holding the Ludicrous button in the car’s settings menu for five seconds activates the Easter egg.

It comes with a warning though – enabling the new high power mode accelerates wear on the motor, gearbox and battery.

Tesla boss Elon Musk also says this speed boost will enable the Model S P100D to cover the quarter mile in just 10.6 seconds. For reference, a McLaren P1 is recorded doing that sprint in 10.1 seconds - giving some indication of the massive performance the P100D has on offer.

The Model X hasn't been left out of the upgrade, and in a seperate tweet Musk says the 0-60 and 1/4 mile sprint times for the bigger, heavier SUV should improve, too.

In a previous conference call  Musk said “there are only 2 cars faster to 60mph and those are the LaFerrari and Porsche 918 Spyder. It can beat a McLaren F1 - that’s nuts.

“The fastest car in the world that you can buy new is electric. In the future people will look at gasoline cars as quaint - not how you get around.”

The P100D addition to Tesla's lineup was announced late last year, and it's available on both the Model S and Model X SUV. The cars cost £114,200 and £117,200 respectively, and feature a more powerful battery pack than previous range-toppers.

It'll be limited to a small number of cars at first, with Musk noting that despite a relatively small increase in capacity it's much more difficult to produce. "The production volume initially is quite low because of the challenge in producing it: making sure it’s effective and safe," he said.

Tesla customers who have ordered a P90D with Ludicrous mode but not taken delivery can upgrade to the 100 kWh pack for an extra fee. Existing P90D owners can also upgrade, at a larger cost.

The P100D will contain a 100kWh battery – increasing performance over the existing P90D model. Despite having the same power output as the 90kWh battery, range is up to 613km (381 miles). An increased 0-60mph time as low as 2.5 seconds is possible, achieved through enhanced software and powertrain updates. The P100D moniker means it gets four-wheel drive, too.

Musk said the charge rate is unchanged on one of Tesla's Supercharger fast charging stations - though as there's more miles to charge it it might take a little longer.

Further upgrades for the Model S this year include an increase in charger size from 40 amps to 48 amps, allowing shorter charging times both at home and public charging points. This is accompanied by Tesla's advanced air filtration system, too.

Tesla's new 60 and 60D models are designed to create a new entry point to the range. The new 60 starts from £53,400, wbut still manages a 248-mile range, a top speed of 130mph and comes equipped with Tesla's autopilot software.

The 0-60mph time is just 5.5 seoncds, but that can actualy be improved with a simple software update, at an extra cost: the battery pack in the 60 and 60D is actually a 75kWh unit, so customers can upgrade their car's performance via Wi-Fi.

Would you buy a Tesla Model S? Which version takes your fancy? Let us know below...