Location is everything, even when it comes to engines. 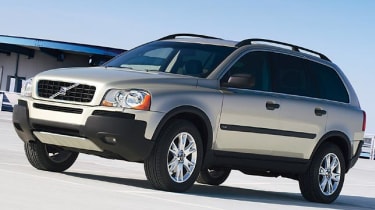 The Volvo XC90 D5 looks exactly the same as the outgoing model, but with a reworked engine, gearbox and four-wheel-drive transmission, it's a better all-rounder. While buyers won't be keen on the price hike, there are lots of improvements for the money.

Location is everything, even when it comes to engines. While Volvo's D5 diesel unit has always been near the top of the class in the S60 saloon, it has never offered as much appeal in the heavier XC90 off-roader.

This model's power and refinement are no match for the BMW X5 3.0d so, to make its SUV more desirable - and keep up with the competition - Volvo has reworked the 2.4-litre five-cylinder oil-burner. A larger turbocharger, an improved injection system and a redesigned combustion chamber have raised power from 163bhp to 185bhp, and torque from 340Nm to 400Nm.

As a result, the XC90 D5 can now sprint from 0-60mph in 10.9 seconds and reach a top speed of 121mph. In addition, performance across the entire rev range is better. There is considerably less turbo lag than before, and throttle response is much sharper.

A reworked four-wheel-drive system improves traction, while the new standard six-speed manual gearbox enhances the driving experience even further. A six-ratio auto will be a £1,350 option in the UK from October. The heavily revised engine makes the off-roader feel noticeably quicker, quieter and more refined. Diesel rattle is reduced, and the unit is now keen to rev. But economy has fallen slightly to 34mpg, while C02 emissions have risen to 219g/km.

However, these figures are lower than those of the Volvo's key rivals. And the new Euro IV-compliant model is far cleaner than its predecessor, too. The XC90 D5 costs £1,535 more than the car it replaces, but you can really feel where the money has been spent.