Minor changes inside and out are hard to spot, but take nothing away from this incredibly versatile seven-seater 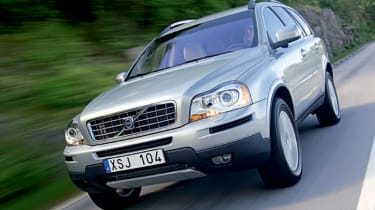 The new 3.2-litre engine is smooth and powerful, and makes the XC90 better to drive than the old model. There's a small price to pay with increased fuel consumption, but it's a minimal expense for the motor's added flexibility. Minor changes to the exterior and interior are hard to spot, but take nothing away from this incredibly versatile seven-seater. It's a welcome addition to the range.

There's no doubt about it - 2006 is a busy year for Volvo. The Swedish firm has already launched the C70 convertible, its new C30 premium hatchback is on the way and now a revised XC90 SUV has been thrown in for good measure.

You'll have to look hard to notice the exterior changes, although you may spot the xenon headlights that come as standard on the top two models in the range. The door handles and rubbing strips are now colour-coded, and there's a chrome strip around the rear number plate, plus new tail-lights.

The only other clues are larger door mirrors incorporating side repeaters, while you can order the optional blind spot information system (BLIS). This shows a red light at the bottom of the A-pillar to warn you when an overtaking car is hidden from view. Volvo has also made the front and rear under-bumper skid plates larger, although this is more for show than to help off-roading.

Inside, the centre console features a new display for the stereo and optional mobile phone kit, while the materials used in the cabin have been treated to a more tactile satin finish. To keep up with the times, the stereo is now compatible with MP3 players, and the main dials have brushed aluminium surrounds.

Yet all these revisions are blink-and-miss-it stuff. The real news lies under the bonnet, in the shape of a new 3.2-litre straight-six. Taking the place of the turbocharged 2.5-litre five-cylinder petrol engine, it's the same motor that powers the S80 luxury saloon and will appear in the new Land Rover Freelander.

With 236bhp - that's 26bhp more than the 2.5-litre unit - you feel the difference right from the off. Acceleration is brisk, with 0-62mph taking 8.9 seconds - more than half a second quicker than the old car. The extra brawn can also be felt elsewhere, and the SUV is now much more accomplished at overtaking. It's smoother and quieter at all speeds, too.

The XC90 has always been one of the quietest large off-roaders, and now it delivers executive saloon levels of re-finement. Its six-ratio Geartronic auto-matic transmission is slick, and even offers a manual override mode, if the driver is in a sporty mood.

However, push the Volvo hard, and it's obvious it's still not as accomplished through corners as a BMW X5 or Mercedes M-Class - although it's still good at dealing with bumpy roads.

There is a price to pay at the pumps, though, as the 3.2-litre only manages 23.9mpg on the combined cycle, compared to the old engine's 25.2mpg. There's also an increase in CO2 emissions, but then the 2.5-litre was in the top tax bracket, so company drivers won't feel much of a hit. Volvo expects most UK buyers to opt for the new SE Lux spec, which costs from £38,428 and comes with an auto gearbox, leather trim, heated, electrically adjustable seats and 18-inch alloys as standard.

This new 3.2-litre petrol model is around £1,000 more than the D5 diesel version in SE Lux trim, but the engine's extra performance and refinement will make it worth considering.