Does a greener, leaner diesel engine breathe fresh life into Volvo's ageing SUV? We get behind the wheel of flagship R-Design version to find out. 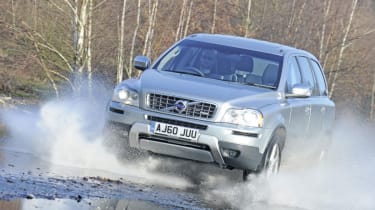 Such is the enduring appeal of this rugged SUV, Volvo has launched a whole range of XC-badged models. The original remains a remarkably talented machine, and despite being eclipsed by rivals dynamically, the updated drivetrain means it’s still a class contender. This flagship comes well equipped, too, and offers the bonus of seven seats, but the high price plus costly parts and servicing may put off some buyers. p.p1 {margin: 0.0px 0.0px 0.0px 0.0px; line-height: 10.0px; font: 8.0px 'MetaMediumLF-Roman'} span.s1 {letter-spacing: -0.1px}

Meet the SUV that opened up the Volvo brand to a new audience – and after nearly a decade on sale,
the XC90 is still proving hugely popular. Does an uprated diesel engine continue to keep this latest model in contention?
The off-roader’s looks have really stood the test of time, and its handsome proportions are as striking as ever. Even this top-spec R-Design seven-seater avoids the showiness of most of its rivals, with only the quad exhausts and 19-inch alloys adding a touch of style to the chunky exterior.
Just one engine is on offer – a 2.4-litre D5 five-cylinder diesel, mated to a six-speed auto box. The drivetrain suits the XC90 perfectly, and now comes with an extra 15bhp and 20Nm of torque. It’s also slightly cleaner and more economical than before (returning 34mpg combined), although it can’t match the six-cylinder oil-burners from Audi and BMW.

The Volvo is a refined motorway cruiser, but it emits quite a racy growl when accelerating. Don’t be fooled, though – the XC90 is far from being a sports car.
While the lofty driving position gives a commanding view of the road, you can really feel the two-tonne bulk shifting around through corners. This body roll comes despite the R-Design’s special suspension set-up – however, the softness makes for a cosseting ride, as do the plush and supportive leather seats.
Unfortunately, the rest of the cabin is starting to show its age. The centre console houses a dizzying array of buttons, and the remote-controlled sat-nav is infuriating at best – it’s very tricky to operate on the move.
Build quality is still superb, but the XC90 is utilitarian rather than luxurious. While the sturdy plastics will please family buyers, they’re a little disappointing on a car that costs £40,000-plus. Land Rover’s similarly priced Discovery is a step up by comparison. As a family workhorse, though, the big Volvo has few peers.
The split-folding tailgate makes for easy loading, and there’s a cavernous 1,837 litres of space on offer with the back seats folded flat – even if rearranging them is rather hard work.
Legroom is ample, but the hard-to-access rearmost seats are strictly for kids, as adults will find head and legroom at a premium. Yet while the XC90 is feeling a little tired now, it’s still a decent all-rounder.
Rival: Audi Q7 3.0 TDI
It has a similar price, and Audi’s seven-seater is smarter inside. While it can’t match the Volvo for load space or looks, its V6 diesel is quicker and cleaner.
Share this on TwitterShare this on FacebookEmail