The XC90 has a 4x4 system, but it’s more of a luxury SUV than rugged off-roader. Its road-biased set-up means a comfortable ride in all models and plenty of grip, although those seeking a smoother drive would do well to steer clear of the flashy 21-inch or all-new 22-inch wheels.

There is a fair amount of body roll if you take corners quickly (although most owners won’t) while the steering errs on the side of lightness rather than sporty reaction. We preferred delving into the manual drive settings to opt for a comfortable ride and relaxed gear changes, but a bit more steering weight.

Refinement is very good, there's a vague hint of wind noise around the mirrors (sited well back on the front doors to improve forward visibility) but it's only noticeable due to the general quiet and calm in the cabin. 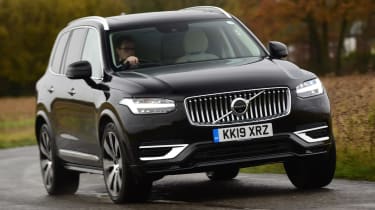 The XC90 has permanent ‘on demand’ four-wheel-drive that puts most of the power down through the front wheels. It can, however, send torque to the rear when conditions demand. The T8 Twin Engine hybrid version has a different 4x4 system, as it uses its electric motor to drive the rear axle.

On the road, the XC90 strikes a neat balance between comfort and agility, with great body control and a rounded edge to the standard steel suspension’s damping. It means you can push the car fairly hard and guide it down narrow country lanes while still retaining that composed ride.

An air-suspension system is optionally available that replaces the front coils and transverse rear springs. This delivers even smoother progress than the standard set-up, and the Active Four-C system also adds adaptive dampers, so you can adjust the suspension to suit the driving you're doing.

Power comes from a trio of 2.0-litre four-cylinder engines; the D5 PowerPulse has been substituted for the B5 which adds a mild-hybrid system, although this still has a 232bhp output. The T5 petrol with 247bhp and the T6 turbocharged and supercharged petrol unit offering 296bhp, will also be equipped with mild-hybrid technology. Above that is the T8 Twin Engine, which adds plug-in hybrid tech to the standard T6 petrol unit, and gives the driver over 385bhp to play with ‘on demand’.

The engines provide decent if not outrageous performance, but they’re all reasonable when it comes to CO2 and mpg. Volvo’s four-cylinder-only engine policy means a slightly higher-pitched engine note than you might expect in the petrol cars, but the diesel sounds cultured rather than rattly. Generally speaking, refinement is impressive regardless of which unit you choose.

Volvo’s B5 unit is a close match for the four cylinder Land Rover Discovery, while the addition of PowerPulse technology helps to reduce turbo lag. The system blows air through the smaller of the two turbos when you’re off the throttle to improve response when you get back on it, then the bigger turbo provides more power at speed. However, on the road it’s difficult to notice the tech having an effect.

The XC90 performed well when we tested it in older D5 guise, sprinting from 0-60mph in 7.9 seconds. The Volvo’s in-gear performance was respectable, too, as it accelerated from 50-70mph in eighth in just 12.7 seconds. That was around a second faster than either the Audi Q7 or Land Rover Discovery that we tested it against at the time. The new B5 version improves its sprinting ability, able to crack 0-60mph in 7.1 seconds and pressing on to a limited top speed of 112mph.

However, you do have to push the accelerator a long way to get a decent hit of performance, and the gearbox holds on to revs before changing up. This adds to the noise levels and the XC90 is better at a steady cruise with the eight-speed automatic gearbox producing smooth shifts.