The Q2 is smaller than an A3, but it offers similar passenger and boot space 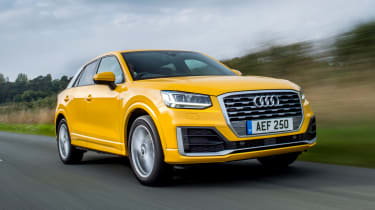 The Q2 interior is relatively spacious considering its small footprint – Audi claims similar interior space to an A3 and we wouldn’t argue. Of course, the higher roofline and more upright seating positions help, but you actually sit slightly lower in the Q2 than you do in other small SUVs, helping to give the car the claimed ‘go kart feel’ that Audi mentions.

At 4121mm long, the Q2 is 167mm longer than an Audi A1 and 116mm shorter than an A3. Among SUVs, it’s a smidge shorter than a Nissan Juke and the best part of a school ruler shorter than its big brother, Audi’s Q3. So we can safely say it qualifies as a small SUV.

And the problem with small SUVs is they can look a bit dumpy, while a short wheelbase and high centre of gravity combination can play havoc with ride and handling. Thankfully, Audi seems to have come to terms with both. 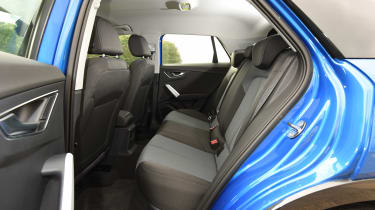 Front seats have loads of adjustment, so the very smallest and the very tallest drivers will be able to get comfortable, especially with a steering wheel that adjusts up and down, as well as in and out. Headroom is good, too, even in the rear where Audi’s designers have worked hard to keep the roofline low for a sportier look – there’s a distinct hollowing out of the roofline at the back but a six foot passenger can sit behind a six foot driver in reasonable comfort. Your knees will just about be brushing the back of the front seats, but you won’t have to splay your legs out.

Passengers of a more average height will have no complaints in the back, unless they’re asked to sit in the middle of the back row. As usual, that’s a raw deal: narrow, hard and with less space for feet.

The larger side windows and light headlining help create an airier atmosphere, but the Audi suffers from small door openings, making access to the rear bench a little tricky.

Visibility is good all round in spite of a fairly shallow rear screen at the back. However, the boot door (which can be powered for another tick on the options list) opens wide to reveal plenty of space. At 405-litres (rising to 1,050 litres with the rear seats folded) it’s bigger than an A3’s, only 15-litres off a Q3’s, but some way shy of a Countryman’s 450-litres.

The boot floor can be raised slightly so the floor is flat when the seats fold, and you can also opt for a 40/20/40 split for easy through loading of longer items. 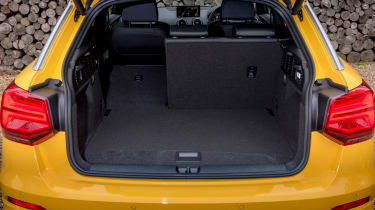 Storage is reasonable inside, too, with decent-sized door bins and glove box, plus handy places for cups or phones in between the seats. There’s also a slot to rest the key in, as the Q2 comes with a keyless system where you don’t have to physically turn the key to start.