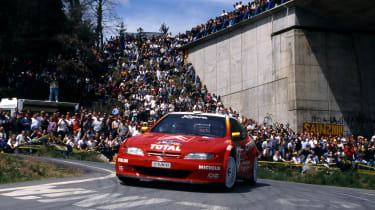 The recipe for a modern rally car is well proven. It starts with a family hatchback or supermini. There’s always a turbocharged four-cylinder engine, and to extract every bit of grip from the varied surfaces involved in rallying, four-wheel drive is a must.

But back in 1999, the top stars of the World Rally Championship were humbled not once but twice by a Frenchman in a naturally aspirated, front-wheel-drive Citroen. And they weren’t happy about it.

The problem started when French brands Peugeot, Citroen and Renault lobbied the sport’s governing body, the FIA, for rules better suited to their domestic series – which took place exclusively on tarmac. The powers that be created Formula Two as a result, with no turbos, only two driven wheels, and a lower minimum weight than the four-wheel-drive World Rally Cars.

F2 kit cars, as they were known, had high-revving engines that produced in excess of 300bhp. They had sophisticated front differentials to help put the power down. Plus, the fact that they weighed a quarter of a tonne less than the World Rally Cars meant they could claw back any seconds lost during acceleration. On asphalt, they were potent weapons indeed.

The Citroen Xsara was probably the ultimate F2 kit car, and there were nervous glances from the WRC regulars when the brand turned up at the Rallye de Catalunya to pitch its racer against the world’s best.

Sure enough, by the end of the first day in Spain, Citroens were one-two, with local ace Jesus Puras a few seconds clear of Frenchman Philippe Bugalski. While the lead car retired on the second morning, the second Xsara stretched its legs and built up a lead of nearly 20 seconds. By the finish ramp a day later, its winning margin was half a minute.

Things didn’t improve for the WRC regulars a fortnight later in Corsica. The island roads were twistier than those in Spain, but it mattered not to Bugalski, who eased into a lead of more than 10 seconds during the opening day. 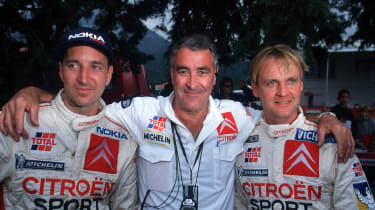 Britain’s WRC stars weren’t impressed. “It’s a championship for World Rally Cars,” said Colin McRae, “so why should there be a car that comes along and beats what is supposedly the top formula?” Richard Burns called the situation “a bit ridiculous”.

The other teams were hoping that Corsica’s fickle climate would intervene – that a heavy rain shower would be enough to wipe away the Xsara’s advantage. But while the downpours did come, they had little effect; even in the wet, Bugalski had enough pace to keep the WRCs at bay.

In the end, he won by more than half a minute – from the other Xsara, driven by Puras. The closest four-wheel-drive car was well over a minute adrift.

Bugalski never won another WRC round, and he was eased into retirement as Citroen focused its efforts on a four-wheel-drive Xsara and Sébastien Loeb. But that pair of victories back in 1999 remain the last for a two-wheel-drive car at World Rally Championship level – a record that it’s hard to see the amiable Frenchman, who died in 2012 after an accident at home, ever losing.

Learn more about how Audi changed the world of rallying with the Quattro here...