The Peugeot 208 Black Edition breathes some life into the ageing supermini, but can it compete with SEAT Ibiza and Citroen C3 rivals? 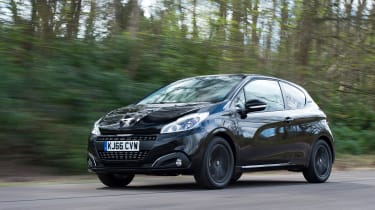 The bold 208 Black Edition injects a little extra style into a supermini starting to feel its age, but it’s becoming difficult to recommend alongside accomplished rivals like the new SEAT Ibiza and Citroen C3. A completely revised 208 is due next year with a fresh range of engines, more kit and an upmarket interior, and – judging by Peugeot’s recent product wins – we reckon it could be well worth the wait.

A new Peugeot supermini will arrive in due course, but for now the firm’s 208 marches on – five years after its debut. The introduction of the Black Edition focussing entirely on styling additions hints that the current 208 is well into its lifespan, and may not be around for much longer.

It’s only available as a three-door, and Peugeot sees it as a key model while the clock ticks down on the 208 range. The Access trim has been dropped and this new Black Edition replaces the Active specification – forming a stylish entry point to the 208 range.

• The best hatchbacks you can buy

Priced from £14,735, the Black is £95 more expensive than its five-door Active-trim equivalent. Peugeot is offering some tempting finance deals, though, including big deposit contributions, low finance and attractive monthly repayments. And if you’re after a three-door 208, this is now your only choice without stepping up to the pricey GTI hot hatch.

There are three colours to choose from; black (obviously), white and grey, while other exterior highlights include 16-inch black alloy wheels with white laser engraving, a gloss back finish on the grille, tinted rear windows and gloss black door mirrors. While style is subjective, if standing out from the crowd is high on your shopping list, the 208 Black’s visual tweaks could be tempting.

While the cabin is well finished with smart looking black cloth trim and a leather steering wheel, the 208 is beginning to feel its age inside. The first-generation i-Cockpit dashboard layout is the same as it has been since the car’s launch in 2012, and while the materials are good quality, the design is in desperate need of an update. The all-digital dials found in Peugeot’s new 3008 SUV is a massive improvement, and only makes the 208’s setup feel dated and unintuitive to use. For some, finding a comfortable driving position in which the tall instrument binnacle isn’t blocked by the top of the steering wheel will remain difficult, and even on a short drive it can be irksome. 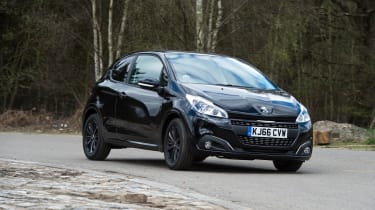 In terms of tech goodies, the Black Edition’s highlights include a seven-inch touchscreen infotainment system, electric and heated door mirrors, and cruise control. The touchscreen system isn’t the slickest to use and screen resolution is low, but it’s a welcome addition given it’s paired with a DAB radio and Bluetooth connectivity, plus Apple CarPlay and Android Auto for maps and music. Rather refreshingly, there are no options to choose from.

Under the bonnet, the 208 Black comes exclusively with Peugeot’s 81bhp 1.2-litre three-cylinder petrol, mated to a five-speed manual gearbox. It’s not the least powerful engine available in the 208, but the 0-62mph sprint takes 12.2 seconds, and due to the lack of turbocharger it feels rather lethargic. It doesn’t much fit with the sporty exterior, either, which is a bit of a shame.

Yet while a claimed 68.2mpg is impressive, the 1.2 PureTech engine’s 104g/km CO2 emissions fall foul of the government's new VED bands. Previously, the 208 Black Edition would’ve cost just £20 per year to tax, but from 1 April it’ll set you back a flat rate of £140 – the same as a Ford Focus RS or BMW 320d. It should be really cheap to insure for younger buyers, though, falling into the same group 10 as the old 208 Active model.