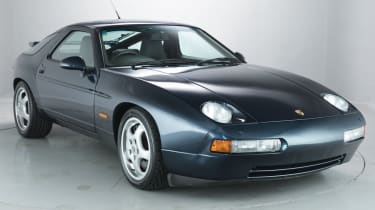 Designed to replace the 911, but ultimately fulfilling a very different role, the Porsche 928 has always stood apart from its rear-engined brethren. With four seats, a decent amount of space for luggage and a large V8 engine nestling under the bonnet, the 928 made a far better grand tourer than the 911 ever could.

It was a genuinely ground-breaking car when it was launched in 1978 too, and after scooping the European Car of the Year award, the model’s future looked bright. Porsche spent a lot of time and money making sure that this front-engined, V8-powered coupe would blow the world away. It was an engineering masterpiece, and was such a groundbreaking effort.

So advanced was this Porsche at launch, the 928 remained in production – basic design effectively unchanged – for around 17 years. Of course the 928 evolved over the years with added spoilers, more equipment and and more power, but the basic formula of quick and comfortable ability remains a constant through the range.

As impressive as the 928 was as a package though, the traditional 911 buyers were simply not interested – which is why the 928 was never replaced.

What’s not to like? ‘Thirst and complexity’ are the usual retorts. It’s true that 20mpg is a best-case scenario for any 928 – but with most of the survivors now being kept as second cars, that’s less of an issue. And while there seems to be an awful lot of engine shoehorned under the bonnet, it’s really a straightforward design that can rack up enormous mileages.

Of course, the 928 was an expensive car when new, with commensurately high servicing bills. But today’s non-franchised specialists charge more reasonable prices and there are plenty of secondhand parts around – sadly, many good cars were stripped out for track day or race use, although this has slowed down in recent years.

Despite its recently discovered potential as a racing car, the 928 was always marketed as a GT and about 80 per cent were sold with automatic transmission. Manuals are now sought after for track days, but the 928’s big V8 is ideally suited to an auto ’box and gives a relaxing drive.

Chances are that if you fancy a 928 you’ll already know what you want: either the design statement of the original car (no spoilers, no side strips, Pascha interior, telephone-dial alloys) or the sheer speed and greater luxury of the S4-and-later models. Buyers tend to fall into one or other camp.

The late-’70s cars are by far the rarest now and are the only 928s likely to have any long term investment potential. They are not particularly fast by modern standards but they’re the simplest and cheapest to run.

Moving on a few years, a 1980s S or S2 still has a certain period appeal, retaining the egg-shaped rear of the original car. Among the restyled cars, the S4 is the sensible buy – as its engine is bulletproof – while the GTS is the most hardcore and most expensive to fix, having unique brakes and engine.

While track work might not immediately spring to mind for a 928, quite a few have been stripped out and prepped for track day and even competition use. While it was relatively easy to pick up a cheap example and convert it into a track car a few years back, increasing values and rarity have made it less popular.

You can still find the occasional track car for reasonable money, but unless it has been prepared (or at least thoroughly inspected) by a reputable Porsche specialist, we would advise caution.

• Corrosion: the 928 bodyshell was galvanised right from the start of production, so structural rust is rare. Early cars will typically show the odd bubble around rear windows or hatch (where trim clips have broken the galvanising), but usually corrosion is restricted to paint scabbing on the alloy bonnet, front wings and door skins. Accident damage is obviously where trouble can start, and even a proper repair from 10-15 years ago can start to show its age.

• Cambelt: mechanical parts also last well. Cambelt failure is the biggest danger: on 4.7-litre and later engines the valves can then collide with pistons (4.5s aren’t affected). The belt should be changed every four years or 60,000 miles. It’s wise to renew the water pump at the same time.

• Engines: when the GTS was launched, a number of engines suffered from excessive oil consumption due to porous cylinder liners. Many cars had new engines from Porsche, however if the car you’re looking at wasn’t one of them, ask the owner about oil usage. If it uses an excessive amount today it could spell big bills in future.

• Suspension: the 928’s suspension hardly changed during production, which means that you could, in theory, fit GTS suspension to a 1970s car. OE-spec dampers are now hugely expensive, although specialists do offer aftermarket sets for considerably less.

• Gearbox: the 928 has its gearbox mounted just ahead of the rear diff, and it’s connected to the engine by a torque tube. Manual ’boxes don’t have the sweetest changes but are tough, while the automatics are Mercedes-Benz units, so very reliable. However, failure to check the flex plate tension regularly can lead to a worn crank thrust bearing and, ultimately, a wrecked engine block.

• Electronics: 928s do suffer electrical gremlins if not driven for any length of time, but the wiring is actually quite easy to trace. Make basic checks on the operation of the electric windows, mirrors, seats, headlights and central locking, as these could be costly to rectify if paying a specialist.

• Air-con: air-conditioning will rarely work on an older car and may cost £500-600 to repair. Interiors last pretty well but the 1970s pyschedelic-check trim known as Pascha eventually falls apart at the seams. While good condition second hand items are nearly impossible to find, reproduction fabric is now available through specialists.

Jaguar XJ-S – If you want a great-looking GT, the XJ-S is right up there with the 928 for style. This British choice is less unreliable than you might think, but the repair costs of a poorly maintained example (of which there are many) can be even more eye-watering than the Porsche.

BMW M635CSI – Perhaps lacking the drama of the Porsche’s stunning aesthetic, this big BMW coupe is perhaps more of driver’s choice. That’s not to say it doesn’t look great!

Mercedes-Benz 560SEC – Comfort and speed don’t come much more easily than in the big Benz, and if you like toys this is the car for you. This was the most expensive car Mercedes built at the time, and as well as offering fantastic luxury it’s beautifully built.

Ferrari Mondial – This four-seater Ferrari might be a little unloved, but at the end of the day it’s still a Ferrari…

Porsche 928 prices have been generally very steady for the past decade, with a very gentle upward trajectory for the most desirable examples. To some extent, the condition is more important than model or year. A superb car, early or late, might sell for up to £45,000, but good usable examples start at around £15,000.

Very early cars start from around £6000 for something needing work (although projects can still be picked up from upwards of £2500), with the later models becoming more expensive as the power and spec levels increase. The advice is to steer clear of anything too cheap, as the potential bills associated with these will often be substantial.

The most valuable is the high-performance GTS model, with prices usually starting from £35,000-£45,000. Perfect examples, especially with low mileages, are often advertised at more than £85,000.