New Targa 4 is still just as stylish but now more usable than ever, thanks to a new 3.0-litre turbo engine 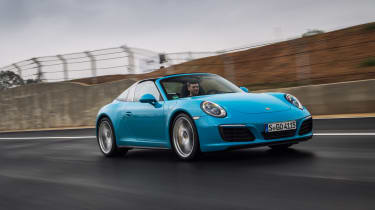 Porsche’s new 3.0-litre turbo engine for the 911 range arguably makes most sense in the new Targa 4, filling in its predecessor’s performance gap with gutsy mid-range grunt. It teams this with impressive efficiency for a sports car, while it still looks as good as ever on the outside. Even more interior tech improves the cabin feel, too. However, at more than £90k it’s a seriously expensive car.

Like the rest of the new 911 range, Porsche’s part-coupe, part-convertible 911 Targa receives the same range of updates, including the firm’s controversial new 3.0-litre turbocharged flat-six engine. That said, it’s arguably the model that needed it most.

While the Targa may look drop dead gorgeous, the balletic electric folding roof mechanism adds extra weight. It’s nearly 100kg heavier than the Carrera 4 Coupe, which dulls performance – so the punchier engine is a bonus.

In the old Targa you had to rev the flat-six hard to extract the speed, but in this new car, while it’s still not quick enough to leave you breathless, the extra power and torque mean you don’t have to work the engine quite as much. 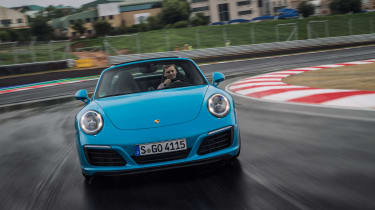 With 365bhp the 0-62mph sprint is dispatched in a swift 4.5 seconds, but it’s the 450Nm produced from just 1,700rpm that makes a bigger impact. It gives the Targa extra flexibility over its predecessor, so you can hold it in gear and let the engine pull where previously you’d have to change down and use more revs.

It’s no hardship to work the gearbox though, as our test car was fitted with Porsche’s engaging seven-speed manual. The shift action is perfectly weighted and so precise that it draws you into the car, egging you on to drive it harder. The engine isn’t quite as musical higher up the rev range as the old, sonorous flat-six, but it still sings to its rev limiter, which is now set lower at 7,500rpm.

This isn’t a purists car or a drivers’ 911, though, so the extra mid-range performance is a benefit rather than a drawback – while the added fuel economy from the more efficient, downsized turbo engine increases its appeal. 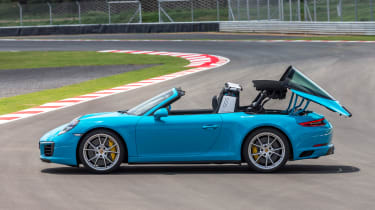 But the Targa still packs all the qualities you expect from a Porsche. Fitted with the firm’s latest four-wheel drive system there’s loads of traction to call on, while the accurate steering lets you place the car perfectly on the road, with just enough feedback to put you at the heart of the driving experience. However, with the roof off you can also feel the chassis isn’t quite as stiff as the Coupe.

There’s not as much flex as in the Cabriolet, but over the washboard roads of South Africa, we could feel the high frequency vibrations through the structure.

Accept that this isn’t an out-and-out sports car and the Targa’s appeal is obvious, giving you the practicality of a coupe with some of that open-air delight of the convertible. That’s not to mention the undeniable style.

Push the button to remove the middle roof panel and the huge glass rear screen arcs backwards gracefully as the beautifully choreographed movement tucks the fabric out of sight.

The resulting void adds an extra element to the driving experience and some wind in the hair thrills. Plenty, in fact – as with the roof down the Targa is rather blowy inside the cabin. But at least the glass screen and big silver roll over bar don’t impinge on the 911’s usability. 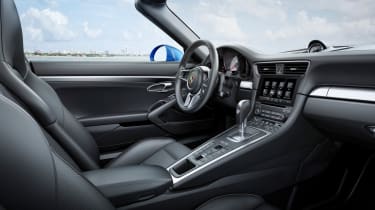 It still boasts two small seats in the rear for children or extra luggage, and combined with the front boot there’s a surprisingly useful 285 litres of luggage room on offer.

When it comes to style, there wasn’t much wrong with the previous generation 991 Targa, but Porsche has given the car some nip and tuck surgery to keep it looking as fresh as the rest of the 911 range. So there are new front and rear bumpers, ‘3D’ taillights, and the same vertically slatted engine cover as the rest of the line-up.

As with the revised Coupe and Cabriolet, the Targa benefits from a raft of extra kit. However, the arrival of all this extra tech makes the Targa’s biggest weak point even worse: price. The previous model wasn’t cheap, and this new entry-level Targa 4 (there is no two-wheel drive version) costs a considerable £90,240. You’ll really have to like the looks to put your order in.